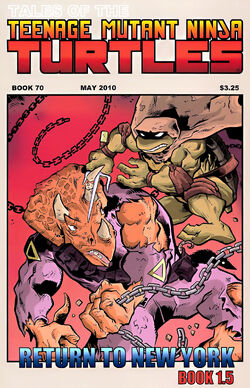 Zog is issue #70 of Tales of the TMNT volume 2, published on May 2010 by Mirage Studios. It is the final issue of the volume.

Set during the Return to New York story line. Raphael lies in a sewer tunnel, remembering the events of the last few days. The fight with Leonardo was four days ago, yet Raph still feels the pain in his shoulder. He knows at this time that he can't show any sign of weakness, for it's up to him alone to rid the sewers of the overwhelming plague that infests them. He must exterminate the Foot.

Frontispiece.
Add a photo to this gallery
Retrieved from "https://turtlepedia.fandom.com/wiki/Zog_(Tales_issue)?oldid=534534"
Community content is available under CC-BY-SA unless otherwise noted.