Zodiac is a two-part story arc printed in Teenage Mutant Ninja Turtles: Amazing Adventures issues #1 and #2. It is the inaugural story arc of the new series.

The turtles are out at the docks at night where Donatello is using his mutagen scanner to search for Dr. Cluckingsworth, after local reports of sightings of a chicken with a giant brain. They quickly discover Fishface running out of a warehouse, being chased by Cluckingsworth. Fishface dives into the water and disappears. Cluckingsworth then uses her psychic powers to attack the turtles, knocking them unconscious. A mysterious figure with ram-hoof-like shoes stands over the four turtles, telling Cluckingsworth that these aren't the mutants he seeks. Donnie catches a glimpse of a symbol on the figure's shoe before he passes out.

Later, the turtles have retreated to their lair, trying to figure out why Cluckingsworth would betray them. Donnie identifies the symbol he saw as that of the Japanese Zodiac, which is made up of twelve signs based on animals. Splinter overhears Donnie, asking his son to tell more about the shoe he saw.

Back at the dock, Splinter has accompanied his sons to continue the investigation. Splinter appears to realize who the shoe prints belong to, but cannot explain before they are confronted by the Shredder, Oroku Saki, arriving in person alone and wanting to talk to Hamato Yoshi. The turtles spring into action and attack the Shredder, who very easily knocks down Donatello, Raphael and Michelangelo. Leonardo then briefly spars with the Shredder before Splinter calls for a halt to the battle.

Splinter and the Shredder start talking to each other in what Donnie explains is "Ancient Japanese". The turtles themselves cannot immediately understand this speech, and Donnie prepares to use his T-Phone to translate the text when Splinter explains the situation in English: The "Zodiac" has returned with the power of the ox, rabbit, horse and ram.

The group is interrupted when Pigeon Pete flies in from the sky, shouting for help and explaining he was looking for the turtles (and bread). The Shredder grabs Pete by the neck and demands an explanation. Pete reveals that Leatherhead and Rockwell have been attacked. Splinter and the Shredder immediately recognize them as "the dragon" and "the monkey," and the Shredder adds that Tiger Claw (the tiger), Rahzar (the dog) and Bebop (the boar) have also already been taken—and so has Karai (the snake), and this news in particular alarms and worries Splinter. At the same time, Donnie is researching the zodiac signs on his T-Phone, and realizes that when Cluckingsworth (the chicken) is counted, only one symbol is still missing: the rat. And with this, Donnie has a terrible realization.

The group is then ambushed in a massive puff of smoke, and soon find themselves surrounded by Bebop, Cluckingsworth, Leatherhead, Rockwell and Tiger Claw. Every one of them with the power of speech is uttering a single word: "Zodiac." With this, Donnie alerts the others that they're trying to capture Splinter. Pete panics and flies away, leaving the others to fend for themselves. Splinter instructs his sons to strike their allies with mercy. The Shredder calls this a sentimental weakness as he fiercely attacks Rockwell and Bebop. Raph tries to use this opportunity to attack the Shredder himself, but is again easily knocked down. Splinter's concern for Raphael is enough of a distraction for Karai to land an attack on Splinter.

A new ram-like figure arrives, announcing that he brings unity. Splinter immediately recognizes him as Tetsumi Onamota, whom he declares brings only the promise of destruction. Splinter tries to attack Tetsumi, who uses a mysterious technological device against the rat. Splinter docilely joins the other opponents, with Tetsumi explaining that the rat belongs to the Zodiac now. 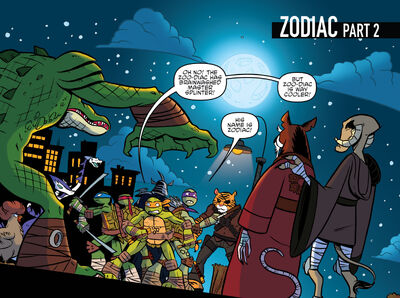 Picking up from where Part 1 left off, Michelangelo exclaims that "Zoo-diac" has just brainwashed Splinter. Donatello corrects Mikey that the ram-like figure's name is "Zodiac", but Mikey insists that "Zoo-diac" is a cooler monster name. The Shredder loses patience and tries to attack Zodiac, but Zodiac and the rest of his minions (including Splinter) vanish in another puff of smoke.

Soon, on a building rooftop, Leonardo demands the Shredder explain to them who Zodiac is. The Shredder begins to tell a story.

Zodiac's name was originally Tetsumi Onamota, and he was like a brother to both Hamato Yoshi and Oroku Saki in the Hamato Clan. When the three of them were still children, Tetsumi discovered an artifact—the Zodiac Key. Tetsumi proceeded to use the key to harvest life and powers from the animals of the zodiac. But this process was unstable, and Tetsumi quickly went insane, unleashing an assault that wiped out half the Hamato Clan. Yoshi and Saki jointly defeated Tetsumi, and thought him dead.

The Shredder says that Tetsumi has returned with the Zodiac Key and is now even more powerful. The turtles wonder if the Shredder seeks to team up with them to defeat Tetsumi. Raphael scoffs at this idea, and the Shredder agrees as he promptly summons and orders his Foot-Bots to annihilate the turtles, announcing that he will defeat Tetsumi by himself.

In another place, Splinter struggles against Tetsumi's voice in his head. Splinter warns Tetsumi that the Zodiac Key's power cannot be controlled, but Tetsumi calls this a lie, believing Yoshi had wanted it for himself. Splinter pleads that he was Tetsumi's friend and was trying to help him. In the real world at this moment, Tetsumi and his other minions (now including Rahzar) stand over Splinter, who is lying on the floor as Tetsumi continues his argument. Tetsumi accuses Yoshi of leaving him for dead and leaving him stranded in the state he's in now. Splinter explains that Tetsumi's desire for power caused him to do this to himself, and that Yoshi had tried to save him. Tetsumi dismisses Yoshi's words, and declares that Splinter's rat power will soon complete his Zodiac and unlock true power. Tetsumi begins harvesting the animal powers from Splinter and the other Zodiac minions, and his ram-like form soon starts to transform to incorporate animal elements from all members of the Zodiac.

Back on the rooftop, the turtles continue to fend off Foot-Bots after the Shredder has already gotten away. In the midst of heavy fighting, Donnie explains that he left a tracking device on the Shredder, and they can locate him after the fight—a fight that still has them outnumbered. Leo leads his brothers in jumping off the rooftop together.

In the warehouse, Splinter continues to resist Tetsumi's Zodiac Key. Tetsumi compliments Yoshi for his strength of mind just before ordering his minions to break Splinter's will. Through the power of the Zodiac bond, the minions assault Splinter's mind all at once, causing him to reel in pain.

The Shredder barges into the warehouse. Tetsumi declares that the power of the Zodiac is now already his. The Shredder says this is only because Tetsumi stole the Zodiac Key from him, and that it should be with the Foot Clan. Tetsumi dismisses the Hamato Clan and Foot Clan as both meaningless compared to the Zodiac. This distraction proves enough for Splinter to regain self-control and attack Tetsumi, knocking the Key out of his hand.

Tetsumi and Saki both scramble to grab the Key, but the turtles burst through one of the warehouse's glass windows and join the attack on Tetsumi. Donnie catches the Key, and quickly realizes that the artifact is actually some kind of Kraang technology. Bebop attacks Donnie, knocking the Key out of his hand, but it's quickly caught by Raph, who considers it obvious that the Zodiac Key is part of the Kraang's mutating technology. Leatherhead attacks Raph, knocking the Key out of his hand, but it is caught by Splinter. Yoshi declares that neither Tetsumi nor Saki should have the power of the Zodiac, and he promptly breaks the artifact in two. Tetsumi immediately loses his grip on his Zodiac energy and quickly disappears in noise, light and black smoke.

The Shredder picks up the broken pieces of the Zodiac Key, declaring that he can still kill Splinter and the turtles even without its power. Donnie quickly mentions that the tracking device he left on the Shredder is also an explosive, and wastes no time detonating it, causing the Shredder to stagger back and drop the Key fragments. All of Tetsumi's former minions soon regain control of their senses, and the Shredder quickly orders Rahzar and Tiger Claw to grab Karai and make their escape, which they immediately do with the aid of a smoke bomb. Splinter and the turtles examine the torn clothes Tetsumi left behind with his disappearance.

Back in the lair, Donnie examines the fragments of the Zodiac Key, and confirms that it is indeed Kraang technology, but was constructed thousands of years ago. He describes it as an "animus energy exchange device." Though they have won this battle, Splinter laments that his old friend Tetsumi was once a good person. Splinter also believes they may see Tetsumi again, as he was already once thought to have died, and the Zodiac power he possesses is unstable. 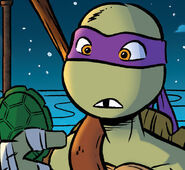 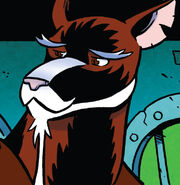 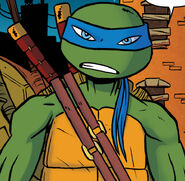 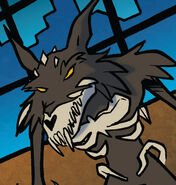 Add a photo to this gallery
Retrieved from "https://turtlepedia.fandom.com/wiki/Zodiac_(story_arc)?oldid=488700"
Community content is available under CC-BY-SA unless otherwise noted.