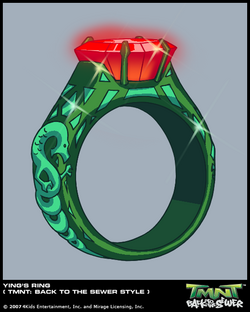 Ying's Ring is a very powerful magic artifact. It appears in the "Back to the Sewer" episode The Engagement Ring. The ring gives the wearer the ability to upset the delicate balance of the dual forces of the universe (Yin/dark and Yang/light) by tapping into the dark half and harnessing it in the form of evil power, turning the wearer evil in the process against their will. They can then perform the magical powers of:

But since evil corrupts, the longer one wears the ring, the more they turn to the darkness eventually making them "become the monster forever".

A magical safeguard exists in the ring that prevents anyone but the one who placed the ring onto the finger from removing it.

Retrieved from "https://turtlepedia.fandom.com/wiki/Ying%27s_Ring?oldid=388804"
Community content is available under CC-BY-SA unless otherwise noted.