Wingnut and Screwloose appeared in the Archie Comics Teenage Mutant Ninja Turtles Adventures first in TMNT Adventures #8—presented here for the first time as a team, Wingnut and Screwloose would later become part of The Mighty Mutanimals an offshoot of the Archie comics. The two found their way to Earth, where they first came in conflict with the Turtles. Upon returning from Stump Arena in Dimension X the Teenage Mutant Ninja Turtles encounter a pair of aliens, one was the bat-like Wingnut, the other his partner Screwloose, the two were flying around Manhattan shattering skylights believing that Krang was hiding inside one of the nearby buildings. The TMNT were soon attacked by Wingnut and Screwloose who destroyed the Turtle's blimp. After a short fight the TMNT subdued and tied up the duo, but quickly learned the only reason they attacked them was in belief that the Turtles were working for Krang who had committed genocide on their homeworld out of pure mischievous, leaving Wingnut and Screwloose the last of their species respectively, with the misunderstanding cleared up at this point they were abducted by Cudley the Cowlick who explained to the TMNT that he was going to take them to compete on Stump Asteroid.

The TMNT later reunited with the duo of Wingnut & Screwloose, when the Turtles, Cherubae, and the Intergalactic Wrestling Federation joined forces against the Foot Clan and Maligna, at first it seemed Wingnut would be of little help, and that he was completely uninterested in joining the fight against the Malignoids, especially after he and Screwloose flew away from the battle completely, but in fact it turned out Wingnut's super hearing detected the voice of Krang, and he attacked Krang, Shredder, Bebop, and Rocksteady, preventing the Foot Clan from obtaining the Turnstone. The aliens from then on formed a friendship with the earthly mutants.

He was eventually killed along with the other Mighty Mutanimals in Megadeath, Part 7.

Wingnut made a cameo appearance in Tales of the TMNT Volume 2 Issue #58. 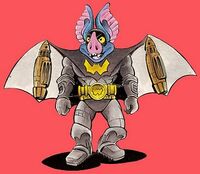 Wingnut's first appearance was actually as a villain and ally of Shredder in a mini-comic that came with Ralston-Purina's Teenage Mutant Ninja Turtles cereal. Wingnut was also portrayed as a villain in the 1987 cartoon series, hailing from Dimension X.

Wingnut's figure bio and Archie Comics incarnation portray him as a hero.

In all incarnations, the emblem on his chest is reminiscent of Batman's logo. And his figure bio plays him up as a Batman parody. This is clearly intentional as Batman was having an upswing in popularity due to his recent movies.

Retrieved from "https://turtlepedia.fandom.com/wiki/Wingnut_(Archie)?oldid=456547"
Community content is available under CC-BY-SA unless otherwise noted.