Start a Wiki
Wingnut is a comic book superhero and the partner of Screwloose.

In his comic series, Wingnut is an alien brown bat who comes from the planet Dexion V in the Huanu system. He lost his parents at the Intergalactic Movies and later adopted Screwloose when he lost his parents to a tragedy at the Space Circus.

Bat in the Belfry

After April's crystal brought the villain Monoculus to life from his comic book, Mikey tries to use it to bring his favorite comic book super heroes "Wingnut and Screwloose" to life as well. After Casey playfully shocks him, the stray electricity hits the crystal, bringing the characters to life. After a brief altercation that resulted from Wingnut believing that Mikey was their nemesis "Tortoise-Man", the four have a fun night stopping crime and helping people. After fighting Skullface McGillin, Michelangelo and Casey try to tell them that they came from a comic book which, they do not believe. To prove this, they show them the crystal that brought them to life, whose power the two heroes become instantly obsessed with. After grasping the crystal, the two mutate into monstrous forms and fly off toward their bell-tower lair (also animated from the world of the comic). It is there that Wingnut and Screwloose realize that they were never real, but images projected into reality. Wingnut told Screwloose that the crystal can sustain them, and harnessing it's power will make them "more real than the beings in this world". After a fight with the turtles and Casey, April absorbs the excess energy that corrupted them, shortly before they accept their fictional existence and that they do not belong in their world. April then absorbs the energy that made them, as they bid them farewell. 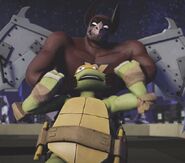 Add a photo to this gallery
Retrieved from "https://turtlepedia.fandom.com/wiki/Wingnut_(2012_TV_series)?oldid=468124"
Community content is available under CC-BY-SA unless otherwise noted.