Dingbat Buddies who Bite the Baddies!

Wingnut, the clutzy, caped vampire bat, quietly hung out on his home planet Huanu. That is, until Krang destroyed it. Saved and sucked into a vortex before his planet exploded, Wingnut ended up on Earth, along with Screwloose, a levelheaded Huanu mosquito.

Furious and frantic that Krang blew up his planet, the crazed Wingnut's out to get even with Krang - or anyone else associated with the burbling brain. That makes him a perfect ally with the Turtle teens.

Despite Wingnut's bloodshot eyes, defective radar, stunted wings and oversensitive ears, he's determined to be a sewer-superhero. Even with constant training from our green teens, Wingnut's more likely to bump into a building than bust a baddie. Armed with mechanical turbo wings invented by Donatello, Wingnut flutters and putters to put the bite on the Foot Clan. 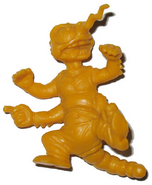 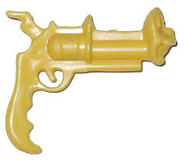 Bat Gun
Add a photo to this gallery
Retrieved from "https://turtlepedia.fandom.com/wiki/Wingnut_%26_Screwloose_(1990_action_figure)?oldid=481596"
Community content is available under CC-BY-SA unless otherwise noted.