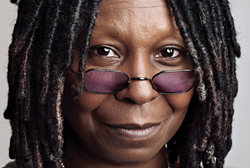 Caryn Ela​ine Johnson, better known as Whoopi Goldberg, is an American actress and talk show host. She first rose to prominence starring in the 1985 movie The Color Purple, playing a mistreated black woman in the Deep South. In 1990, Goldberg starred in the movie Ghost, playing a psychic helping a slain man find his killer. The performance won her the 1991 Best Supporting Actress Oscar. Her other well known roles include Vera in Rat Race, Delilah in How Stella Got Her Groove Back, Delores in Sister Act and its sequel, Shenzi in The Lion King, Valerie in Girl Interrupted and Sarah in Made in America. Goldberg is also famous for her role as Guinan in Star Trek: The Next Generation and has hosted The View since 2007.

She played the role of Bernadette Thompson in the 2014 film reboot.

Retrieved from "https://turtlepedia.fandom.com/wiki/Whoopi_Goldberg?oldid=479996"
Community content is available under CC-BY-SA unless otherwise noted.