It is a story full of narration but largely without dialogue, as Foot Clan jōnin Splinter explains to his new chūnin Jennika the background of what it means to be a ninja, while the scenes show both Jennika's observations of the Turtles in the present along with flashbacks of her life before becoming a Foot Assassin.

Jennika observes Raphael as he jumps over rooftops and almost goes down into the sewer, but is stopped when he sees a robber holding two women at gunpoint. When one of the women attacks the robber with a broom, Raphael leaps in to stop him from shooting. Jennika takes pictures of the fight as Raphael easily beats the robber, and vanishes from the store once he's done.

Later she lurks on a rooftop, watching as Donatello is pursued by some of the E.P.F.'s flying robots. He lands on a window-washer's platform and swings down on scaffolding, as Jennika photographs him. Donatello leaps over car roofs and down into the subway, narrowly avoiding the robots' fire, and leaves some of the destroyed robots for the pursuing E.P.F. agents to find. He finally makes his way back to his home, where he plugs a component into the half-built Metalhead.

Michelangelo feeds pigeons in an empty park while Jennika lurks in the bushes. A woman jogs by, followed by an N.Y.P.D. cruiser, which two thugs step out of. More criminals surround the woman, only to suddenly be attacked by Michelangelo, who effortlessly fights his way through them. Once they're all dispatched, he bows to the woman, but is dismayed when she is frightened and runs away from him.

Then Jennika lurks in the sewers, watching Leonardo as he meditates under an artificial waterfall. He hears something, and rises to see hundreds of rats pouring out of a sewer pipe. He easily kills many of them with his sword, but many others swarm over his body. Suddenly the rats turn back and flee from whence they came, revealing Leonardo cross-legged and exerting his will over them.

Throughout this series, Jennika's past is shown through a series of flashbacks: as a young girl, she found her father beating her mother, and was chased out of the apartment, beginning her new life on the streets. She eventually shaved off her hair, and took up with a homeless young man who began robbing stores with a friend of his. Eventually Jennika also took part in their robberies, one of which led to the death of an innocent bystander. Jennika was arrested when she tried to stop and save the man.

In prison, she was badly abused by the other inmates, but made a friend—an imprisoned Foot Ninja who rescued her and helped her hide. The two of them trained in secret, and began plotting their escape from the prison. But when they finally made their way to the outside world, the friend was brutally murdered by another escaped convict, leaving Jennika alone.

She found her way to the Foot Clan, and when she was found by them, she gave Shredder the Foot Clan scarf that her friend had worn. As an assassin, she hunted down and killed the woman who had murdered her friend, and began killing others whom the Foot Clan ordered her to. Finally, as a sign of how she has changed since meeting the Turtles, she remembers training with Leonardo.

Finally, we see Splinter speaking to Jennika about the nature of the ninja, and the way her brief time around the Turtles has changed her view of the possibilities for the future. Behind a Foot Clan banner, Leonardo watches them both. 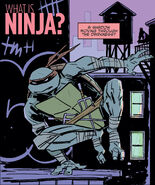