We Wish You a Turtle Christmas

We Wish You a Turtle Christmas is a 25-minute, live-action Christmas special released direct-to-video in October 1994.

It's Christmas Eve and the Ninja Turtles have accidentally forgotten to get Splinter a gift. The Turtles argue about who was supposed to get the gift. Unfortunately, the stores are closing so they don't have much time.

The Turtles go above the surface, apparently undisguised, and decorate a tree in Times Square. Michaelangelo sings some opera much to the others' annoyance.

After Mikey stops singing, they go to a store to buy the gift. They suggest comic books, video games, and yo-yos, but end up buying a framed plastic pizza. While wrapping the gift, they sing the Wrap Rap.

Splinter accepts the gift and compliments his students for their thoughtfulness and giving spirit. Splinter invites his sons and a bunch of children, who he apparently invited over for Christmas, to sing his own version of the Twelve Days of Christmas.

Raph: Oh no. He's turning into that opera guy again!

Contains some of the same music as the "Coming Out of Their Shells" tour. 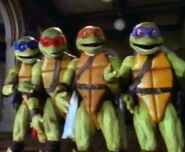