Wayne Bishop was the father of Agent Jonathan Bishop and husband of Marie Bishop in the IDW comics series. He was notable for being the one who first founded the Earth Protection Force in order to protect the human race against all "monsters" (non-human intelligent creatures such as mutants or aliens), after becoming a high-ranked C.I.A. agent. Most around him believed that his worries were the stuff of paranoia and fantasy, including future Senator Robert Lawson, but his son John believed him completely.

Wayne Bishop was born sometime in the later half of the 20th century. By the 1940s he had become a C.I.A. agent and was called in to investigate the crash of an Utrom spacecraft in Roswell, New Mexico, on July 7, 1947. He had the ship and its pilot taken to Area 51 for examination and released conflicting information to the public to cover his tracks.

In 1968, he was informed about an emergency involving his wife while going over the progress of examination with Doctor Yuhasz. He found his wife Marie had given birth prematurely, and both mother and son being treated at the Las Vegas General Hospital. The hospital staff informed Wayne that his son John was too fragile to be expected to survive the night. Marie blamed him for never being present and for being unable to do anything to save their son and ease her loneliness. Later that night, he broke into the hospital and took John to perform an unknown procedure that saved his life. His son proved to be very intelligent but was stunted and deformed, having reached his full physical growth by six years of age. Wayne had an exo-suit based on Utrom technology built for John and modeled on his own likeness so that he could live as normally as possible.

By the 21st century, Wayne had been stricken with Alzheimer's disease and was living at the Greater New York Senior Living center. Bishop came to inform him that the "monsters" he had believed in had shown themselves, and in a moment of lucidity, Wayne told him a story about President Dwight D. Eisenhower being frightened by something he had seen. Furthermore, he warned his son that by hunting monsters, they risked becoming monsters themselves.

Shortly thereafter, he was kidnapped by Old Hob in a desperate bid to rescue the Mutanimals. Along with Pam Knight, he was brought to the ruins of StockGen where Old Hob sought a trade with Darkwater and the E.P.F., but his son steadfastly refused to negotiate with the mutants to ensure his safety. Darkwater instead released the Mutanimals, freeing Bishop's father.

When Bishop used a mind-controlled Slash to attack Hob and the Turtles, Hob threatened to shoot Wayne if he didn't stop. However, Bishop denied that the old man was his father, saying that he was just a mindless shell and that all that he was now resided in his son. Wayne regained lucidity just long enough to realize what was happening as his son killed him. 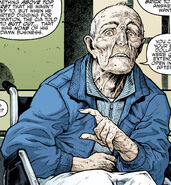 Add a photo to this gallery
Retrieved from "https://turtlepedia.fandom.com/wiki/Wayne_Bishop?oldid=549609"
Community content is available under CC-BY-SA unless otherwise noted.