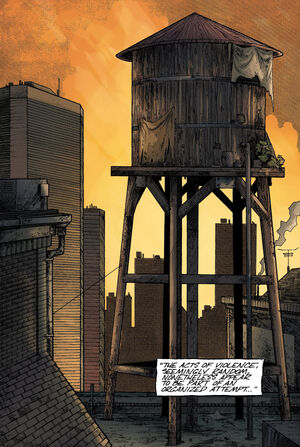 In the Mirage continuity, the water tower serves as the lair of the turtles after their return to New York City in City at War, Part 1 of 13 until Part 7 of 13. Unlike most of their other secret lairs, this one is not located in the sewer or anywhere underground—it is an abandoned water tower located above the rooftop of a city building.

When returning to New York, the turtles do not return to their second sewer lair, which seems to be abandoned without explanation. Instead, they squat inside an abandoned water tower, which they soon furnish and make livable as a lair, though it remains spartan and poorly insulated from the harsh winter temperatures. It is also a rather somber retreat, as they are moving on without Hamato Splinter, April O'Neil or Casey Jones in their lives, and they lack a clear sense of purpose.

Their time in the water tower comes to an abrupt end when Karai's Foot Clan surveils and locates the turtles to this location, and they dynamite and collapse the floor of the water tower to force the turtles out, though actually with the intent of talking to them rather than trying to kill them. Nevertheless, the water tower is destroyed and can no longer serve as anyone's home.

Retrieved from "https://turtlepedia.fandom.com/wiki/Water_Tower_(Mirage)?oldid=532837"
Community content is available under CC-BY-SA unless otherwise noted.