Under attack in their own home, Splinter and the Turtles (minus Donnie, whose body lies in a coma but whose mind is in the robot Metalhead at Harold's lab) defend themselves. Hearing the robots cries of “kill the rat”, Leo urges Splinter and Raph to fall back to the basement to lure the robots away. Leo puts Mikey in charge of watching over Donnie, then goes to join Raph and Splinter.

Just then, Robo-Donnie arrives, startling Mikey. Donnie explains that the two of them need to follow their family to help, and asks Harold to teleport his body to safety on Burnow Island. Donnie's body arrives safely and the Fugitoid begins more advanced healthcare. Donnie asks Harold to send for Nobody (Angel rocking the tech suit built by Harold) to help them.

Angel receives the message from Harold, and she and Alopex begin racing towards the Turtles. The police transport van holding Hun and Detective Kara Lewis is stuck in traffic and Officer Johnson, who pointed out Alopex and Angel to Detective Kara earlier, points them out again as they leap from rooftop to rooftop. Detective Kara ignores them, as she's concerned with getting Hun into custody without any problems. She tells the officer that during her years deep undercover she saw all sorts of strange things, so nothing surprises her anymore. Suddenly an explosion rocks the van, knocking it on its side. Appearing out of nowhere, Hob orders Herman to free Hun. Detective Kara pulls herself out of the wrecked van and tells them to freeze but Herman drops a smoke grenade and they run to the Mutanimals' truck. Hun is confused by Hob springing him but doesn't complain. Hob explains that freeing Hun was in his best interest, as now Hun owes him a favor. Watching them flee, Detective Kara states that this turn of events has indeed managed to surprise her.

At Foot Clan headquarters, Kitsune also expresses surprise, at Shredder inviting another outsider into their midst, in this case Stockman. Shredder explains that he is using Stockman as a means to an end, that end being Splinter and the Turtles' demise. Kitsune asks Shredder what he's going to do about Karai, who disagrees with bringing in outsiders. Shredder tells her that after his business with Stockman is concluded, he will remind Karai of her place. Shredder asks Stockman for a status report. Stockman assures him that his robots are working as designed and Splinter and the Turtles are on the run.

Splinter and the Turtles have fled to the sewer tunnels beneath their hideout. Donnie explains that more robots are coming so they should lead them away from their home. Leo, Raph, and Mikey take the plunge into the sewers and Donnie transforms his robot body into a boat for Splinter. The family heads through the tunnels and emerges in the bay, but the swarm of killer robots is still in pursuit, now in greater numbers than ever. The robots begin to try and separate the Turtles to make it easier to get to Splinter. Donnie uses Metalhead's grappling hook to get Splinter to safety atop a bridge. Unfortunately, the robots immediately change course and hone in on the two of them.

Fortunately for Splinter and Donnie, Alopex and Angel finally catch up with them and begin battling the robots as well. Leo, Raph, and Mikey climb up to the bridge and the seven of them prepare to continue the fight.

Regular Cover A by Mateus Santolouco.

Subscription Cover by Ryan Brown.
Add a photo to this gallery 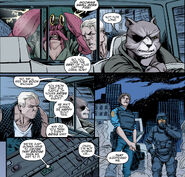 Retrieved from "https://turtlepedia.fandom.com/wiki/Vengeance,_part_4?oldid=429642"
Community content is available under CC-BY-SA unless otherwise noted.