Hun, Link, Malo, and countless other Purple Dragons stand outside the Second Time Around antique shop. Casey, Angel, and Alopex step outside to meet them. Overhearing the commotion from upstairs, Jon and Beth O'Neil call the police. Hun says that Casey is pathetic and weak, but Casey counters that he's simply learned honor, as it was something his father never taught him. Casey, Angel, and Alopex attack the Purple Dragon gang members despite being vastly outnumbered. Seeing the overwhelming odds, Jon heads outside to help. Across the street, the owner of the corner store Arune sees the same scene unfolding and heads out to help as well, arming himself with the cricket bat Casey gave him earlier that night (see Part One).

Several Purple Dragons manage to subdue Casey and Hun tells him that this time he's finished. Before Hun can do more, he is attacked by Jon and Arune. Angel and Alopex continue fighting other Purple Dragons. Two neighborhood residents, T-Boy and Jimmy, witness Jon and Arune joining Casey and the others in standing up to the gang and head out to join the fight, stating that it's time to protect their home.

Casey continues to battle his father while Angel and Alopex handle the other Purple Dragons. All the while, more area residents pour out of their apartments to aid the vigilantes. The Purple Dragons, eyeing the growing resistance, flee the scene, save for Hun. Hun angrily tells Casey that he's found a new family but Casey points out that his family has bailed on him. Hun laughs, saying that while he and Casey both thought they were right they both turned out to be wrong. Hun states that he can always recruit more gang members, and points out that Casey operates the same way, as he once ran with the Turtles but is now backed up by a random assortment of people who lived in the neighborhood. Hun states that the only constant is their method of operation, to face their problems head-on with their fists. Hun concludes that we can't change the things we inherit from our families.

The police arrive and take Hun into custody. Detective Kara Lewis thanks Casey and the O'Neils for helping apprehend one of New York's most wanted criminals. An officer tells Detective Kara that he just saw a mutant snow fox but she dismisses him, as she's had enough for one night and doesn't wish to do any extra paperwork (Detective Kara became aware of mutants in the city in the Michelangelo one-shot).

At the Turtles' home, Splinter examines the scroll brought to him by April while April comes to terms with Donnie's body lying broken in a coma and Donnie's mind residing within a machine. April assures Splinter that the Foot Clan did not know that the scroll was in their possession. Eyeing the scroll, an image of the Rat King triggers something in Leo's memory. April tells the others that she wishes to be useful, and that she and Casey can head to the Southwest where another scroll is supposedly hidden. Raph tells them that they saw Casey's father Hun earlier that night and he appeared to be drinking again after leaving the Foot.

Inside Foot headquarters, Bludgeon and Koya tell Karai how they found Hun as she ordered them to do, but were distracted by the presence of the Turtles and then turned away by a “secret weapon” (Donnie acting through the Metalhead robot) and as a result Hun escaped. Karai states that their failures are becoming tiresome when the Shredder arrives, much to their surprise, followed by Baxter Stockman. Karai and the others bow and the Shredder dismisses Koya, Bludgeon, Bebop and Rocksteady so as to speak to Karai about their plans in private. Karai insists that Stockman should leave as well, as trusting outsiders has not gone well for the clan in the past, but Shredder tells her not to overstep her authority and presume to know what is best for the clan. Shredder explains that the source of all their problems is the betrayal the clan suffered at the hands of Hamato Yoshi, known in this life as Master Splinter. Shredder tells Karai that in this matter, honor is irrelevant to their revenge. Stockman dons a neural-communication headset and uses it to send out swarms of flyborgs and M.O.U.S.E.R.'s, which can be seen from across the city.

Outside their house, April tells her parents that she and Casey are headed off on a road trip (see the TMNT: Casey & April mini-series).

In Harold's lab, Donnie alerts Harold and the Fugitoid to an unidentified flying object on the radar, headed straight for the Turtles' home.

At the Turtles' base, Splinter keeps Donnie's body company, Leo meditates, and Raph berates Mikey for losing the tv remote again. Suddenly much of the roof caves in, and flyborgs and M.O.U.S.E.R.'s begin to pour inside. Splinter urges his sons to protect Donnie, but the robots are only saying one thing: “kill the rat”.

Regular Cover A by Mateus Santolouco.

Retail Incentive Cover by Valerio Schiti.
Add a photo to this gallery 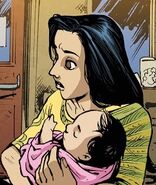 Retrieved from "https://turtlepedia.fandom.com/wiki/Vengeance,_part_3?oldid=429597"
Community content is available under CC-BY-SA unless otherwise noted.