The Varlesh are a shy, peaceful hermit crab-like species of giant crustaceans mostly found in the forested areas the Planet D'Hoonib. After more than two million years of mutagenic activity they have finally settled into their current and somewhat sedentary state. Somewhat hive minded, when intruders invade any particular enclave of Varlesh the aliens will simultaneously hide within their shells seeming to be just "part of the facade" and landscape. Or at least appearing as merely docile, non-threatening shells. Exclusivity and scarcity of the crab-creatures works to their advantage. Many would-be enemies on D'Hoonib and their scientists are unfamiliar with the species thus are oblivious to the camouflage and hiding tactics of the Varlesh. This allows them to continue live in a relative peace. They rely on psionics, psychic communication for general information gathering, passing, and amusement. They can sense sentient beings all at once both of ally and hostile intent. As younglings, they will wander the galaxy mixing with other alien species. Once in their adult form they usually settle down on planets or portions of planets of heavy vegetation. Their older, slightly more sedate nature allows vegetation to also grow on their shells. This allows them to blend in even more among particularly forested environs.

While the Varlesh are a small few, one currently nameless representative crustacean became an unexpected ally, friend, and voice of reason to the Fugitoid. Though it is the only one who is seen speaking aloud, it speaks for the Varlesh community in the Forest as a whole.

Shortly after the Fugitoid's famous mind-melding accident, General Blanque of The Federation sends his men to destroy the "Killer Robot" after landing at Honeycutt's lab near the wooded areas of D'hoonib. The General was down to make his demands on Honeycutt for the information on the Transmat so that he may use it as a deadly military weapon. Discovering the humanoid Honeycutt's charred remains was when he ordered his Federats to open fire on what he thought was merely the good doctor's old robot assistant, Sal. Fugitoid tried to alert the soldiers that he was indeed Honeycutt but they wouldn't listen. As they continued to reign fire on the Robot, he fled for the forest. After Blanque uncovered the Professor's recordings of the accident, he was thrilled as Robots had no rights in this portion of the galaxy. This would make his per suit of the Fugitoid to obtain his knowledge of the Transmat even easier. Or so he thought. He ordered his men to search the woods for the droid.

Honeycutt eventually came to a dense portion of the forest and a small clearing of Varlesh shells. The moss, lichen, and fungi on the shells made them look rather old. Fugitoid had hoped to hide amongst them to throw off the duo of Federats on his trail.

Sensing the hostility of the soldiers but also sensing the alarm and distress of Fugitoid, the Varlesh took sympathy upon the escaping droid. One singular Crab took the Droid under his shell as the soldiers came right into the clearing. Unable to detect the robot among the shells, the two Federats lallygagged for several minutes in the clearing before reporting back to Blanque their failure to find Honeycutt. All the time they were unaware of the true nature of the Varlesh and that the Robot was right under their nose. After the Federats left. While a secondary Crab can be seen peeking at activity under its shell, only the single Varlesh spoke aloud. Thanking his new friend the Fugitoid becomes a bit of a curiosity to the Varlesh as they could read his mind. Just as they could sense the hostile energy emanating from the Federation Soldiers they had never sensed energy from a Robot before. Particularly human energy coming from a Robot's mind.

Fearing that Blanque's forces would return, The Varlesh suggested that Honeycutt flea to Peblak. He also worried also that now that he was a Robot, Blanques sensors and ships would easily pick up his detection. The Varlesh assured him that the large junkyard extending just beyond the forest to the alien city would disguise his metal signal among the rest of the "metal junk" until he got to the city.

More thank were at hand and the Crab and Fugitoid said their goodbyes. Honeycut stated that he would hope he could return one day and talk more. The Varlesh said that he felt that they indeed would meet again in some form.

An unexpected & short but important appearance by the friendly Varlesh is put into Tales of the TMNT, Volume 2 #54.

After Raphael accidentally injures the Fugitoid in a bar room brawl. The the Professor incurs damaged circuitry. Loosing his memory and literally his mind, Honeycutt isn't even sure if the accident with the Mentawave device had really fused his mind with that of the Sal robot, or merely copied it into its circuits. The Utroms, Donatello and the TMNT surmise that it is best for Honeycutt to return to his old lab and site of his accident for some answers. The Federation is alerted however when Don, Raph, and Honeycutt land at the site. Federats are dispatched once again on Fugitoid's case. Though this time he has Donatello and Raph as protection.

After discovering the old Mentawave helmet and disillusioned with his very existence. the Professor goes on overload. Hallucinating on events from his past, not only as a Professor and his dealings with funding from the war mongering federation but also his childhood. His encounters with his siblings as a young boy on D'hoonib, his first contact with the Utroms, and his mother. Near suicidal, the Professor stumbles out of his lab and into the same clearing where he encountered the psychic Crabs years ago. There calming nature soothes the Fugitoid temporarily. The Varlesh are delighted to see their old friend. A provocative and insightful conversation with gives the Professor much to think about. As they ponder that Honeycutt is not still Honeycutt if he had been burned up, an appendage cut off, or even as a robot is he still not Honeycutt? If they ask him a name and he will state Honeycutt. The Varlesh examine his memory and assure him that it is intact despite Raph's attack and that perhaps he has merely forgot something. They invite him to come back to the clearing as often as he likes for he has a kind soul. They enjoy his company and conversation.

The calming encounter with his old allies gives the Professor much to lament and think upon. He cooler Robot returns to the lab and the Turtles who have just defeated the small group of Federats. Raph is continually apologetic to Fugi for the accident. Honeycutt insists that it is all unnecessary and that he thinks their return had given him some time to find himself. At least he supposed. 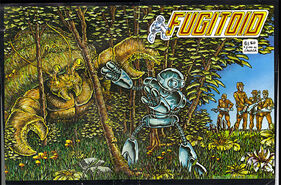 The seemingly ominous Varlesh on the back cover of the orginal FUGITOID #1. 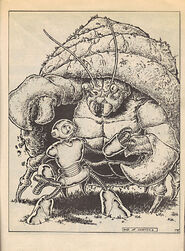 Honeycutt is startled at the first meeting of the massive mound of crab-like creature.

The Varlesh and his cohorts sense the threat of the Federats has gone, Honeycutt has evaded them for now.
Add a photo to this gallery

Retrieved from "https://turtlepedia.fandom.com/wiki/Varlesh_(Mirage)?oldid=460681"
Community content is available under CC-BY-SA unless otherwise noted.