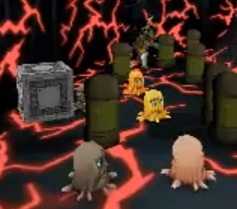 The Utroms are a uniquely-shaped race of aliens who posses a higher form of science and civilization. When their ship crashed in Japan a long time ago, they secretly dwelled on Earth by blending in with the humans. Splinter's master, Hamato Yoshi, was a guardian of the Utroms.

Utrom are a basic enemy in many levels of Teenage Mutant Ninja Turtles 2: Battle Nexus. They appear both on hover discs, and in their exo-suits. One of the main opponents, Slashuur, a Utrom bounty hunter, appears as a reoccurring boss, and later, unlock-able character.

Retrieved from "https://turtlepedia.fandom.com/wiki/Utroms_(2003_video_games)?oldid=492478"
Community content is available under CC-BY-SA unless otherwise noted.