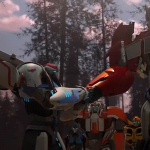 Hey-yo! I'm called HardyGal on here because my first ultimate obbsession was all things the Hardy Boys series, and becuase you'd be crazy to think I'd give you my real name. I'm a homeschooler, the oldest of three other siblings, and if you think I'm weird...? Thanks! I really try!

I once asked my youngest sister which TMNT character she thought I was most like. Her response was 'Mostly Leo, a little bit Raph'. She wasn't very clear, but evidently I yell at her too much, thus why I'm like Raph.

I'm the quotes queen! Slightly overenthusiastic quotes queen, but I am a work in progress.

Random factoids: I'm acrophobic. I love writing, movies and exercising. I'm completely obbsessed with Transformers. I love a lot more things than that which was just written. A very, very large majority of people either won't even check this, or will check this, and not give a dang about what's written.

Retrieved from "https://turtlepedia.fandom.com/wiki/User:HardyGal?oldid=153389"
Community content is available under CC-BY-SA unless otherwise noted.