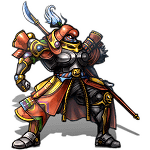 I'm Gilgamesh, also known as Dermot Mac Flannchaidh. I'm 40 years old, and I have read or watched TMNT in some form since the late 1980s. I also have good friends of similar age who are TMNT fans, though none of them are editors on Turtlepedia.

My TMNT thoughts and interests

One of my primary TMNT interests. I read some of volume 1 as a teenager, then the rest of volume 1, most of volume 2 and virtually all of volume 4 when I was older. I really want to see the story completed and have some real closure to the various storylines.

As a teenager I was a huge fan of Teenage Mutant Ninja Turtles & Other Strangeness and a few of the other books I was fortunate enough to get ahold of. Unfortunately, I never had a real opportunity to play these RPGs, as I could never find anyone else to play them with. I did like the Dr. Feral scenarios, though they haven't aged well over the decades.

I certainly watched some of this when I was a preteen, like many of the younger Generation X-ers have. But it was never "great," if that makes sense? It had a half-decent first couple of episodes, and then...a whole lot of nothing all that interesting. I didn't really become a TMNT fan until I entered adolescence and discovered the Mirage version. As an adult, for the most part, I consider the 1987 series a nuisance; a cheap, nakedly-toyetic "anti-TMNT" that can't compare to the real thing and never really deserved the attention it got.

Never read it much when I was young. Read some of it as an adult, and I do appreciate how it matured along with its audience in a way the 1987 version never did. But I was never a devoted fan.

Played most of the games that appeared on NES, Megadrive/Genesis, Super NES and Game Boy Classic. Some were fun in their time, but the one I still love to this day is Teenage Mutant Ninja Turtles: Tournament Fighters for MegaDrive/Genesis. Why such an admittedly mediocre game? Sure, its gameplay is unbalanced, and its story is painfully facile. Then there's the awesome soundtrack by Miki Higashino. Many of those in-game tunes are still the characters' theme songs in my mind. It may be the only reason I still remember characters like Sisyphus.

I largely have never played the later video games.

Watched the first, second and third films when I was young, and the 2007 film as an adult. Honestly, I could take them or leave them. Haven't seen the 2014 film at all, and I'm not in a big rush to see it either.

I finally got around to reading these comics, and I can't say I'm a fan. It reads and feels like an enormous Mirage guest era arc, lacking much of the charm and likability of volume 2 and volume 4. It's not so much the way the characters were changed (Raph disfiguring his face, Donatello becoming a cyborg, Leonardo losing a hand)—I could actually live with these when done well, and issue 25 had a way of wrapping up those plot points and miraculously healing their bodies.

But what felt like too much, laid on too thick, was how extensively the comic crossed over with Savage Dragon. I can understand an incidental crossover without a lot of mutual baggage, like Cerebus the Aardvark. But having Savage Dragon's Chicago coexisting on such a plot-critical level with Image TMNT's New York City created what, to me, was an enormous plot hole for Image TMNT in general: If "freaks" in Chicago live and work openly in the public and are integrated in its public sector, why can't mutants so much as be spotted by strangers in New York? Civilized mutants living in New York could be judged as possible visitors or immigrants from Chicago. This all was a bit too much of a strain to suspension of disbelief.

Never watched it when it was on the air. But since it's gone off the air, I've heard good things about it, especially if one is a fan of the Mirage version.

So far I've seen some of it, and I can't really say I'm a big fan. It's like a G-rated out-of-sequence version of Mirage with much cornier dialogue. I guess some of the artwork isn't bad, though.

A relatively newer passion of mine, and I was responsible for 99% of the edits for MNT Gaiden articles on Turtlepedia before all articles were moved to the Mutant Ninja Turtles Gaiden Wiki where I am administrator.

Interesting reincarnation. (In more ways than one, if you're familiar with the plot.) This version certainly has potential, but I'm still not certain yet if I can say I really like it. I think it needs more time and plot development for me to make up my mind.

When this show started, it was different. It was primarily marketed to the TV-Y7 crowd on Nickelodeon, but it had something that none of the other incarnations seemed to have before—its teenage turtles actually behaving like believable teenagers. With Splinter as the disciplinary dad, this series had a witty, clever sitcom element that made it watchable and rewatchable even to adults in ways the 1987 series could not claim.

I found myself wishing this show weren't so constrained by the TV-Y7 template, so that it could be frank about tackling more realistic teenage issues with a teenage-appropriate level of maturity, more like TV-14. After all, the show kept driving home that most of the main characters were angsty volatile teenagers. Those of us who were once teenagers ourselves, know very well that these characters are likely thinking and feeling and experiencing all sorts of things that a TV-Y7 show can only imply while walking on eggshells. Such things can be done maturely without actively seeking refuge in vulgarity just to artificially shore up an edgy rating. (Not that there's anything wrong with these ratings if the subject matter genuinely necessitates them.)

In particular, my friends and I kept noticing interesting things about Leatherhead, Michelangelo, Raphael, Slash and Anton Zeck—specifically, that each of them were strongly hinted to have an LGBT character facet. This wasn't about stereotypes, but about common wisdom and intuition we had accumulated during our lifetimes as gay people, including things that reminded us of ourselves and our other gay friends that you tend not to encounter in hetero people. And then after Korra and Asami from The Legend of Korra were revealed to be a romantic couple, we thought and hoped that maybe Nickelodeon was being more open to LGBT issues in a youth-appropriate manner, so that LGBT people of all ages would no longer feel so invisible when they watch shows like these.

But season 3 made me uncomfortably realize that this was not going to be a daring show anymore. Eventually, all my friends and I each got fed up with this TV series to the point where we just couldn't keep watching or enjoying it anymore. I was the last one to finally give up on the show. I generally still liked the first two seasons I had enjoyed, but was annoyed by the show's gradual abandonment of any good writing or lasting depth and its increasingly toyetic nature. Instead of Nick being more open to LGBT characters and audiences, it almost seemed more likely that Korra and Asami had actually embarrassed them and had actually been snuck under their noses, which meant that the gay moments in Nick's TMNT series were also probably snuck under their radar. (This turned out not to be the case, as Nick had known about and green-lit Korra and Asami all along. But I digress.) There is something worse than feeling ignored by mainstream entertainment as a minority demographic: It's when you feel acknowledged, and then unceremoniously ignored like you never existed or mattered. What the show did to its LGBT fans was very cruel...and sadly also still very invisible to most mainstream viewers. In this day and age, it shouldn't still be so difficult just to have G-rated gay characters on a TV-Y7 show.

In my time on this wiki, I have made over 1000 animated GIFs from Nickelodeon TMNT episodes. There are so many fond memories there. But I've largely stopped making any more GIFs, because I no longer like any of the new episodes. Each time I saw what I thought was the worst episode of the series, it wasn't long before I saw an episode that was even worse. The show no longer had any soul or lasting substance, the writing become awful, and I wished the show could have been cancelled sooner if it couldn't respect itself, its audience or the TMNT mythos.

I loved this series. I really, really wish it hadn't ruined itself the way it did.

A good (re)start, after New Animated Adventures, with the promise that it would be allowed to carry more of a story and be allowed to deviate from the 2012 series continuity. But for all that leverage Amazing Adventures was supposedly given, it ended up being effectively no different from NAA—highly episodic stories with no later follow-through and no meaningful continuity separate from the TV series. The only permanent difference happened in Robotanimals!, but that was the end of Amazing Adventures anyway. And what was that permanent change? They killed off Baxter Stockman who was still alive in the TV series, but at least they kept Splinter alive after the TV series had killed him off.