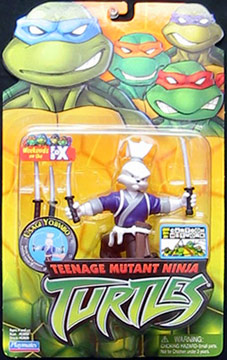 This ain’t no cuddly cottontail or geriatric jack-rabbit – this is Usagi Yojimbo, a noble, honorable, and masterless samurai warrior from 17th century Japan! The Teenage Mutant Ninja Turtles first met Usagi Yojimbo (literal translation: “rabbit bodyguard”) in the Battle Nexus arena competition, where they learn that the samurai rabbit has been an old friend to their master, Splinter, as well as his master, Hamato Yoshi! Back in his homeland (and home-time) of 17th century feudal Japan, Usagi travels the countryside fighting corruption and evil in order to uphold the warrior’s code of honor known as… bushido!

Retrieved from "https://turtlepedia.fandom.com/wiki/Usagi_Yojimbo_(2004_action_figure)?oldid=481585"
Community content is available under CC-BY-SA unless otherwise noted.