The Ultimate Ninja (real name: Ue-Sama) is a character in the 2003 series. In his initial appearances, he was an adversary of the Turtles.

Ue-Sama was a highly skilled ninja, able to hold his own against Leonardo in "The Ultimate Ninja" and succeed in throwing him off a bridge. He often fought with dirty tactics, such as attacking when his enemy's back was to him, when their weapons were incapacitated, or when they were down, not giving them a chance to recover. He also attacked Leonardo after he said he surrendered.

Besides his combat skills, Ue-Sama could use magical abilities such as creating a scrying mirror out of water that could speak with him, and teleport short-range, his cloak encircling him. Its difficult to tell if the power comes from the cloak or Ue-Sama, but it is most likely Ue-Sama using the cloak for dramatic effect. Ue-Sama also traveled from the Battle Nexus to Third Earth on his own, jumping dimensions.

The son of the Daimyo, the Ultimate Ninja first came to Earth to fight Oroku Saki, The Shredder. However, he was deprived of this chance after learning that The Shredder had seemingly met his death at the hands of Leonardo. In response, The Ultimate Ninja challenged Leonardo to a mortal duel, and the two fought. The duel was intense, and neither could the gain the advantage on one another for a lengthy period of the battle. The Ultimate Ninja managed to throw Leo over a bridge assuming that Leo would fall to his death. However, the turtle survived, climbed back up, and managed to defeat The Ultimate Ninja with relative ease. The ninja then dishonorably attempted to kill the Turtles and Splinter (who were spectating the battle) by conjuring up a dragon, which the Daimyo sliced in half, after the fight ended. The Daimyo appeared from behind a cloud of dust and saluted Splinter for teaching his sons such honorable ways of fighting.

The Ultimate Ninja appeared again later when the Turtles entered the Battle Nexus. Allied with the evil Drako, a former rival of Splinter's, he planned to destroy the Turtles and take over his father's throne and the multiverse. He nearly succeeded by both poisoning Leonardo and implicating Splinter in an attempt to murder The Daimyo. However, the Turtles, along with their allies, Miyamoto Usagi and Traximus, were able to thwart his plans. Both The Ultimate Ninja and Drako were then pulled into a rift in space and time created by Drako's nefarious use of the Daimyo's War Staff.

He later appeared as a pet of Savanti Romero, having been fused with Drako into a grotesque entity known as The Ultimate Drako. Stealing the Time Scepter of Lord Simultaneous, he scattered the Turtles throughout different realities, captured Splinter, and weakened his father, The Daimyo. He later seized the War Staff after Leonardo failed to use it to recover his missing family. Wielding the power of The Scepter and Staff, he gathered Leonardo and Usagi together, trapping them in a battle with powerful monsters.

With the Turtles occupied, Ultimate Drako was ready to destroy The Daimyo. But some part of The Ultimate Ninja still partially cared for his father, and his hesitation allowed Splinter to grab onto The War Staff and summon his sons to him. The Turtles and Splinter managed to gain possession of the two relics. The Time Scepter, being partially sentient, combined its powers with those of the War Staff to restore everything to their natural order, including the separation of The Ultimate Ninja and Drako. However, both were then petrified and crumbled to dust. Fortunately for the grieving Daimyo, Lord Simultaneous decided to give his son a second chance, and revived the Ultimate Ninja, bringing him back as a child. Ultimate Ninja embraced his father, who overcame his grief.

The Ultimate Ninja later befriended the Turtles when they returned to the Battle Nexus for Michelangelo's rematch to determine the true victor of the Battle Nexus tournament. He remembered Leonardo, but decided that he must have been someone he played with and declared him his friend. He was temporarily held hostage to ensure that The Daimyo could not interfere with the removal of the Nexus' safety rules, but rescued by Leonardo. Later on, he and his father witnessed April's and Casey's wedding from the Battle Nexus through an interdimensional window.

Unlike his honorable father, Ue-Sama is dishonorable, impatient and short-tempered. His ultimate ambition is to be the greatest warrior in the multiverse, and he believes such an honor can only attained by fighting to the death. He originally intended to challenge Ch'rell as Shredder, but when he learned that Leonardo had defeated him, he challenged him instead. Ue-Sama used dishonorable tactics against Leonardo, but despite this, the blue turtle defeated him honorably. He was taken back home by his father, and punished. While his father believed he had learned his lesson, he actually took his defeat as humiliation, even though he himself had acted dishonorably.

During the Battle Nexus Tournament, Ue-Sama showed his vengeful side, as he played a facade by having learned his lesson, but secretly plotted to overthrow his father and get revenge on Leonardo. He nearly succeeded, but thanks to the Turtles, Splinter, Miyamoto Usagi and Traximus, his plan failed and he was sucked into a dimensional wound alongside Draco.

Despite his intent on overthrowing his father and even kill him, he still cared for him, as he showed this, when he, as the Ultimate Draco, was somewhat unwilling to kill him.

After he was defeated as Ultimate Draco and brought back by Lord Simultaneous as a child, his personality changed into that of an honorable, kind and loving son to his father. He also became a genuine friend to his former rival, Leonardo.

Ultimate Ninja after being revived by Lord Simultaneous 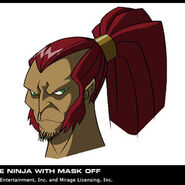 Ultimate Ninja unmasked
Add a photo to this gallery

Retrieved from "https://turtlepedia.fandom.com/wiki/Ue-Sama?oldid=559372"
Community content is available under CC-BY-SA unless otherwise noted.