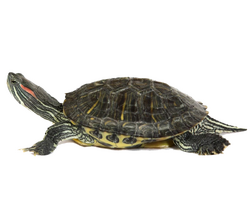 A turtle is any reptile from the superorder Chelonia. Their most notorious feature is having a body encased in a bony shell. Although numerous animals, from invertebrates to mammals, have evolved shells, none has an architecture like that of turtles. The turtle shell has a top (carapace) and a bottom (plastron).

The carapace and plastron are bony structures that usually join one another along each side of the body, creating a rigid skeletal box. This box, composed of bone and cartilage, is retained throughout the turtle's life. Because the shell is an integral part of the body, the turtle cannot exit it, nor is the shell shed like the skin of some other reptiles.

Though in some cultures regarded as different kinds of animals altogether, all tortoises and terrapins are species of turtles.

The purpose of World Turtle Day, May 23, sponsored yearly since 2000 by American Tortoise Rescue, is to bring attention to, and increase knowledge of and respect for turtles and tortoises, and encourage human action to help them survive and thrive.

Turtle Day is celebrated worldwide in a variety of ways, from dressing up as turtles or wearing green summer dresses, to saving turtles caught on highways, to research activities. Turtle Day lesson plans and craft projects encourage teaching about turtles in classrooms. 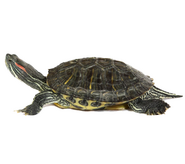