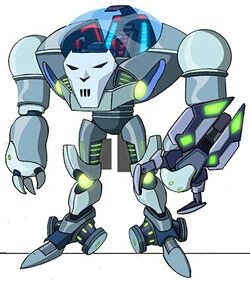 In the 2003 TV series, Turtle X was Cody Jones' mecha, that he utilized to enter combat prior and during his ninja training. A second Turtle X was made from the combination of the first turtle x and Serling after his near-destruction.

Retrieved from "https://turtlepedia.fandom.com/wiki/Turtle_X?oldid=555102"
Community content is available under CC-BY-SA unless otherwise noted.