The Turtle Van is the Turtles' mode of ground transportation in the comic book miniseries Batman/Teenage Mutant Ninja Turtles II. Throughout most of the series, it is seen parked in a large garage where April O'Neil and Casey Jones were working on an interdimensional portal and an interdimensional radio.

During the attack on Bane's forces at Liberty Island, the van was hidden on one of the ferries until Donatello deployed his anti-Venom gas. Then April drove it off the ferry, and used the catapult to launch Michelangelo, Raphael, Leonardo, Robin, Batgirl and Nightwing into the midst of the battle zone.

After the battle, Rocksteady and Bebop were seen being loaded into it, presumably to be taken to the police.

It is seemingly identical to the Turtle Van from the 1987 TV series, containing a catapult on the roof, laser turrets on the front, and a seat that folds out the side with a larger laser blaster. 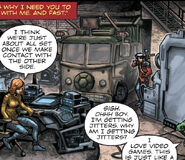 Turtle Van parked in the lair
Add a photo to this gallery
Retrieved from "https://turtlepedia.fandom.com/wiki/Turtle_Van_(Batman/TMNT)?oldid=483111"
Community content is available under CC-BY-SA unless otherwise noted.