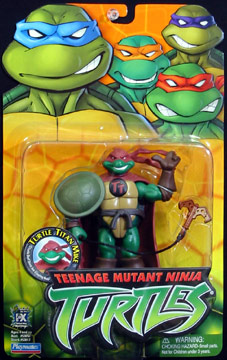 Turtle Titan Mike is an action figure, released in 2004.

Michelangelo as a Real Superhero!


Tired of always sticking to the shadows and missing out on the thanks and praise, Michelangelo decides to head for the spotlight... by becoming an out-in-the-open superhero - Turtle Titan! With a little help from the used clothing in April O'Neil's antiques shop, the Ninja Turtle resurfaced as the colorful superhero Turtle Titan and lent an assist to his favorite superhero, the Silver Sentry, by helping to defeat the Sentry's arch-villain Dr. Malignus. So far, that was the Turtle Titan's one guest-starring role, his first and only appearance... but if we know Mikey, Turtle Titan's sure to return!

Retrieved from "https://turtlepedia.fandom.com/wiki/Turtle_Titan_Mike_(2004_action_figure)?oldid=516033"
Community content is available under CC-BY-SA unless otherwise noted.