The Turtle Mech is a giant turtle-like mecha created by Donatello to protect the Earth from the Kraang invasion.

The Turtle Mech was first seen at the end of "Plan 10", when Donnie designed a quick draft of it on paper. At first, Donnie didn't have an adequately power source for such a construction, which was remedied near the end of "Into Dimension X!" when Michelangelo obtained one for him just before the Turtles left Dimension X.

The Turtles eventually recover the Turtle Mech and and it was used again in the Season 3 episode. "Attack of the Mega Shredder!", when Donnie, Raph, April and Casey use the Mech to find Leo and Mikey, and stop Mega Shredder

In “When Worlds Collide” the Turtle Mech was used against Lord Dregg’s ship, piloted by Raph, April, Bishop and Mona Lisa.

The Turtle Mech is armed with various weaponry including a flamethrower and barrel launcher. 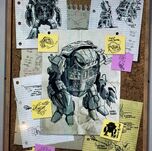 Add a photo to this gallery
Retrieved from "https://turtlepedia.fandom.com/wiki/Turtle_Mech?oldid=551663"
Community content is available under CC-BY-SA unless otherwise noted.