The Turtle Line is a turtle shell shaped grappling hook that the Turtles used in the 1987 TV series. Each of the Turtles carried one, but eventually due to rampant censorship in the UK, Michelangelo would be best known for its use, as it was upgraded to his standard weapon.

The 2012 series featured the Turtle Line: however, it was no longer Michelangelo's main weapon as it was decided to have him use his nunchaku again.

The Turtle Line also is featured in the IDW comic series. When Michelangelo temporarily abandons his nunchaku, he begins using a Turtle Line as his weapon. He continues using it for distance attacks even after he obtains new nunchaku. 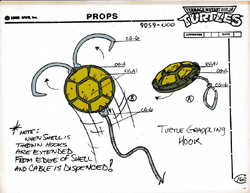 Retrieved from "https://turtlepedia.fandom.com/wiki/Turtle_Line?oldid=546852"
Community content is available under CC-BY-SA unless otherwise noted.