The Turtle Lair is the home of Splinter and the Turtles in Rise of the Teenage Mutant Ninja Turtles.

There is a large atrium in the centre of the lair with three different floors, and multiple tunnels branching off of the walls. On the bottom floor, there is the garage and four bedrooms, each for the different turtles. On the middle floor is the arcade, kitchen, living room, and Splinter's bedroom. On the top floor is Donnie's lab, and the bathroom. (TBA) 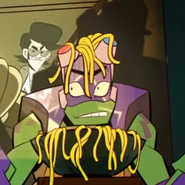 Add a photo to this gallery
Retrieved from "https://turtlepedia.fandom.com/wiki/Turtle_Lair_(Rise_of_the_TMNT)?oldid=523055"
Community content is available under CC-BY-SA unless otherwise noted.