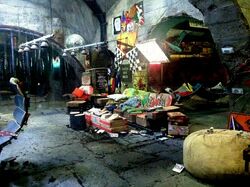 The Turtle Lair is the turtles' secret sewer home from the 2014 film.

The Dojo Walls can speak! Look close and you'll see 11 graffiti markings - ten words or phrases and one tag that represents family.

The family symbol (known as the "Turtle Tag") is written in kanji, a system of Japanese writting that uses Chinese characters. The turtles leave it everywhere they go! Each turtle has their own special graffiti symbol. And they're all SWEET.

The lair is about the sie of a football field!

Why do the Turtles decorate the Lair with items from the outside world? Cause they want to belong!

Look closer: the Turtles' beds are made from old playground equipment.

The Turtles like to call their home a "storm drain" instead of a "sewer". And really, wouldn't you?

The Turtles like to jam out in their practice space and write hit singles. They love all types of music.

Why do the Turtles have 40 working TVs and monitors? Because 41 would be too many.

Behind the screens there are four classic paintings by Leonardo, Michelangelo, Donatello, and Raphael. No, not the Turtles - the famous painters they're named after!

Why is that the sweetest chair EVER? Because it's made of nine skateboards!

Two totally different versions of the Console room appear in the movie. What's different about them? Dude, just see the movie!

It's not shown here, but the Turtles' have a club chair, sofa and table made out of the very FINEST materials: Pizza Boxes!

The Turtle's lair had to be perfect. That's why it took several design phases and 3 months of construction to finish.