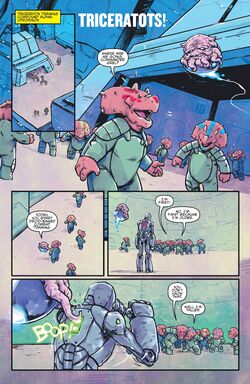 Triceratots! is the a series of two loosely-connected short backup stories published in Teenage Mutant Ninja Turtles Universe issues #16 and #17, published in November and December 2017 by IDW Publishing.

A large contingent of cloned Triceraton children are on Utrominon, beginning their training in droid-based combat. An Utrom named Grel is behind the droid getting pummeled, and is knocked off his little transport plate and sent flying over the heads of the baby Triceratons. Fortunately, he's caught by General Zog.

Grel orders the Triceratots back to their barracks. Zog says that they need to learn a lot more about discipline, and Grel points out that the same was once true of him.

Retrieved from "https://turtlepedia.fandom.com/wiki/Triceratots!?oldid=548166"
Community content is available under CC-BY-SA unless otherwise noted.