In the IDW continuity the Triceratons are not an independently developed race but rather the creation of the Utroms via genetic manipulation of Triceratopses abducted in the prehistoric past, engineered to serve them as workers and soldiers. Later however the Triceratons banded together with other peoples to rise up and overthrow their Utrom oppressors.

The Utroms treated the Triceratons as expendable and replaceable, with reason. As revealed in From the Heart, For the Herd, the original Triceraton population, known to themselves as the First Herd, was all but wiped out while serving as soldiers for Emperor Quanin, with the herd's sole survivor being a very young Zog. The Utroms cloned the dead soldiers to create the Second Herd, and as their clone bodies gradually matured in stasis chambers, the Utroms trained Zog to be a soldier and the clones' general. After the first generation of clones had already matured, one of the mature clones, Commander Zom, discovered something about General Zog's birth parents that triggered both Zog and Zom to begin their rebellion.

After the Utroms defeat the Triceratons were freed from their servitude but without a homeworld. They continued allying with their wartime allies the Neutrinos on the condition that they would be awarded a homeworld of their own. After the Triceratons helped defend the Neutrinos from Maligna's invasion, King Zenter recognized and officially proclaimed Earth as the one true Triceraton homeworld, and facilitated their return to Earth for resettlement. King Zenter incorrectly assumed that Earth's current inhabitants were better prepared to handle the repatriation of an alien species.

When the Triceraton fleet arrived on Earth they initially landed in New York City and attempted to establish peaceful (albeit armed) contact with the humans already living there. But their first official contact was with Agent Bishop and the Earth Protection Force, who declared his belief that the Triceratons (like other mutants originally from Earth) were an "abomination" and mortal threat to the human race and immediately attacked them. The Triceratons and the E.P.F. battled in the streets of New York until they were both ambushed by Splinter's Foot Clan.

The Triceratons successfully escaped and began a full-out invasion of New York, which continued their conflict with the E.P.F. and the Foot Clan. The invasion was stopped when the Utrom Ma'riell agreed to have the Triceratons live on Burnow Island, and the Turtles and Baxter Stockman successfully transported them to the island.

However, the Triceratons' relationship with the Utroms remained fraught with problems, as many lingering resentments on both sides. Donatello mediated a treaty between the two species and uncovered an assassination conspiracy, but there was still a great deal of mistrust among the Triceratons. 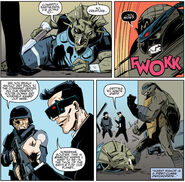