The TriShreddatron is a character that was set to be in the second unproduced season of Teenage Mutant Ninja Turtles: Fast Forward.

TriShreddatron was set to debut in the episode Something Wicked. In "The Devil and Dr. Stockman", he was to attack Baxter Stockman, who now has a human body and has been made Agent Bishop's Secretary of Agriculture. According to TMNT4Kids, "Ch'rell would have been the Triceraton Shredder. He would have taken over the body of a Triceraton Soldier... If you removed the Triceraton Shredder's helmet it would just be Ch'rell wrapped around this guy's face like a face hugger".[1]

According to Peter Laird's episode notes on his blog, the original plan was for Ch'rell to hollow out the Triceraton's stomach and control the character from there somehow; Laird's suggestion was to have Ch'rell invade the Triceraton's skull.

In episode notes on Peter Laird's blog, the character is given the name TriShreddatron (as opposed to "ton", as the species' name is normally given). 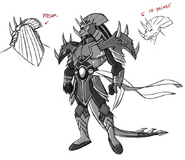