Not to be confused with Transdimensional Teenage Mutant Ninja Turtles.

"Trans-Dimensional Turtles" is the tenth episode of the fourth season of the 2012 TV series, and is the eighty-eighth episode overall in the series. It first aired on March 27, 2016.

The Turtles are transported to another dimension, where they meet their 1980s alternate-reality counterparts. Now, the two Turtles teams must work together and defeat Krang from destroying their worlds.

As the Ulixes continues through space, Mikey joins his brothers and the Fugitoid on the bridge after some trouble sleeping with April and Casey. The Turtles are concerned about destroying the pieces of the Heart of Darkness they already have, but the Fugitoid knows full well that the Triceratons can recreate the other pieces anyhow if they get the final piece, so they have to destroy all of them. Before further can be said, the Fugitoid detects a trans-dimensional anomaly centered around the Turtles. Before anything can be done, the four are transported away, much to the Fugitoid's concern.

The Turtles end up in the world of their 1987 counterparts, who need their help to stop their Krang from setting off a device he calls the "Dimensionizer" to destroy their dimension. Before they can stop him, Krang travels to the Earth of the 2012 Turtles, to plant another one on that dimension's Channel 6 building. Though he puts up a tough fight against the two Turtle teams, the device is retrieved, but Krang manages to escape. Despite that, both teams return to the 2012 Turtles' lair to deactivate the device after the 2012 Donnie notices it to be some sort of anti-matter device, allowing the 2012 Turtles to reunite with the still-alive Master Splinter, who immediately demands an explanation when he sees the 1987 Turtles. As Leo goes to speak with him alone in the dojo, Leo momentarily suffers a vision of things to come in regards to their mission to destroy the Heart of Darkness, with Shredder murdering Splinter, but before he can explain future events, they are summoned to Donnie's lab, who reveals that Krang planted two more Dimensionizers, set to go off in a few minutes unless they are deactivated first. Splinter understands, and allows the 2012 Turtles to help their 1987 counterparts in saving their dimension from destruction.

Unfortunately, they end up in the 1987 Technodrome, where they are confronted by Krang, Kraang Subprime, and several Kraangdroids. It turns out Krang is an old cousin of Subprime, who is proud of Krang's achievements with bringing the two Turtle teams to Subprime's doorstep. After retrieving the device the 1987 Donnie used to originally bring the 2012 Turtles to the 1987 Earth, they return to 1987 Earth and disarm the Dimensionizer atop that Channel 6 building. While the 2012 and 1987 Leos, Raphs, and Mikeys hold off Krang and Subprime, the 2012 and 1987 Donnies travel to the dimension of the Mirage Turtles, the prime dimension, to disarm the Dimensionizer there. They are nearly attacked by the Mirage Turtles, but succeed in disarming the device and taking their leave immediately after, much to the Mirage Turtles' confusion.

Back in the 1987 dimension, with all the Dimensionizers disarmed, the Turtles attempt to leave, but Subprime sends them right back to the 1987 Technodrome, where in his taunting, the Turtles destroy the device that he's using to keep sending them back to the Technodrome, before revealing the true nature of Krang's plan. Furious, Subprime gives Krang a scolding before sending him back to the 1987 dimension as punishment for another screw-up. On his last nerve, Subprime attacks the two Turtle teams, but they manage to defeat him and send him to the Mirage Turtles' dimension, much to his horror.

Their dimensions safe, the two Turtle teams part ways and return to their respective dimensions. Back in the 1987 dimension, the 1987 Turtles are enjoying some pizza when they spot a Kraathatrogon worm emerge from a portal and start to cause trouble. As they leap down and attack it, they are shocked when Tiger Claw cuts his way out of the worm, forcing them to attack him instead. 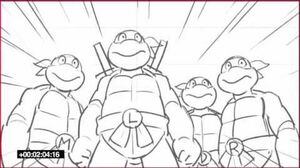