General Traag is the commander of the Rock Soldiers from Dimension X , fanatically loyal in his servitude to the powerful alien warlord/dictator Krang.

"Excellent work, Traag! I'm going to pin a metal on you as soon as I get a pair of hands. " -- Krang

Traag was, just like the Stone Warriors under his command, created by Krang when he moistened the rocks from Dimension X with his Mutagen, and was indoctrinated by him to become a warrior who owed Krang ​​absolute loyalty and lived only for war. Due to his special loyalty, Traag was eventually appointed deputy commander of Krang's forces.

He first appeared in Part 4 of the 1987 TV series' 5-part pilot miniseries, Hot Rodding Teenagers from Dimension X. Traag came in conflict with the Turtles for the first time when he and Granitor had accidentally come through the Technodrome's Trans-Dimensional Portal to Earth's dimension during Shredder's test run. They had been chasing a few youthful Neutrinos named Kala, Dask and Zak, a band of Dimension X resistance fighters locked in a war with Krang's army at the time to bring freedom for their kind. After a small skirmish with the Turtles, the Neutrinos teamed up with them. He and Granitor pursued the Neutrinos through New York City, despite the attempts by both the police and military to subdue them. They were even successful in driving the Ninja Turtles into a full retreat. Their fight with the Turtles eventually resulted in Michelangelo and Donatello sending both Granitor and General Traag back through the portal and to their own dimension.

He's been Lord Krang's most ardent and loyal supporter for an unknown and vast period even after the fall of the Technodrome. Several times Traag tried single-handedly to destroy the Turtles for his master, but failed each time.

He briefly appeared in the episode Usagi Yojimbo, when Shredder was testing an upgrade to the Dimensional Portal, but never materialized fully as the upgrade machine was still experimental.

In Rock Around the Block, he battled the Turtles on his own, using a special laser invented by Krang called the Rockolizer that could put any rock, stone, or mineral at the general's command.

He was trapped in the Technodrome at the end of Shredder Triumphant! when the Turtles sent the Technodrome, minus Shredder, Krang, and Bebop and Rocksteady, through a portal that trapped them in Dimension X.

Though stranded in Dimension X, Traag was still aboard the Technodrome and had access to the base's dwindling resources. In Wrath of the Rat King, Krang requests that his final unused weapon, the Shock Wave, be sent (via the Dimensional Portal) to Earth. Rather than being teleported to Krang's new base, the Hall of Science it is sent into a busy intersection in the City, where police take custody of it. Though retrieved from the Westmore Research Center, the deadly device is eventually destroyed by the Turtles.

Traag and his army's final appearance is in the episode Turtle Trek where they assist their master in his final attempt to re-power the damaged Technodrome's engines. When the Technodrome's engine's are destroyed, Krang and the rest of the Foot Clan become trapped in Dimension X as the Turtles escape though the portal back to Earth. 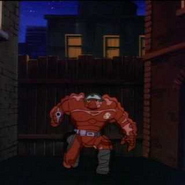 Traag in Turtles's dream in Shredderville
Add a photo to this gallery
Retrieved from "https://turtlepedia.fandom.com/wiki/Traag_(1987_TV_series)?oldid=436079"
Community content is available under CC-BY-SA unless otherwise noted.