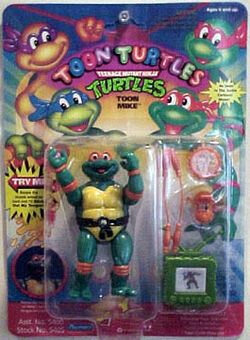 He’s wacky, he’s weird, he’s on TV! He’s Mike, the Toon Turtle you’ve all known and loved. He’s fresh from the sewers of televisionland and ready to take on the real world Foot fools. Mike is famous for his raspy raspberry Turtle tongue – and now you can see him lick the Foot anytime you want! With just a spin of the backside wheel, he’ll twist his tongue and lick the Foot. This loony lad is loaded with tons o’ Toon Tools that’ll make any Foot fighter faint. Mike’s Toon Nunchakus, his cartoon weapon of choice, are always ready for action here on the small screen. This radical rendered reptile has drawn himself up to do battle with any wet brush Foot brain. So hold on to your hats (or your head, if you don’t own a hat), cuz Toon Mike is live and in person. And in raging radical color!

Retrieved from "https://turtlepedia.fandom.com/wiki/Toon_Mike_(1992_action_figure)?oldid=515532"
Community content is available under CC-BY-SA unless otherwise noted.