Favorite Saying: "Get back to work!"
Favorite Pastime: Eating

The hard-edged News Director with the soft middle is pounding the pavement in search of a scoop-of ice cream, that is! He's big, he's boss, he's Burne! And now he's here direct from the news room at Channel 6 and ready to go. You'll know when this loud-mouth's near-just listen for his blubbery blathering voice. And don't be fooled by his titanic tummy-this big-bellied boss is ready for action. If his bull-horn blasted words don't get you, then his two ton typewriter will. So get busy and get to work! You don't want Burne comin' at 'cha with his loaded super sub sandwich club and phony phone (which, by the way, turns into a very nasty weapon). Remember the number one rule of good street reporting-eat first, ask questions later. 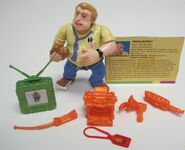