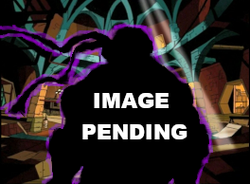 The Time Window was a device developed by Cody Jones in order to view the events of his great-grandparents' lives, but he accidentally brought the Ninja Turtles and Splinter into the year 2105. The Time Window was damaged in the process.Future Shellshock

The Time Window was finally repaired in Tempus Fugit, allowing the Turtles and Splinter to attempt to return home. However, their journey was interrupted by Viral, sending them around the timestream.

Serling, who had been caught in the journey back to the Turtles' time, attempts to make a Time Window to return to 2105, but due to the archaic (by his standards) technology, it instead causes his mass to be displaced in addition to sending him to the incorrect time periods.Incredible Shrinking Serling

Retrieved from "https://turtlepedia.fandom.com/wiki/Time_Window?oldid=438385"
Community content is available under CC-BY-SA unless otherwise noted.