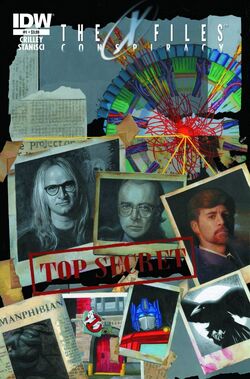 The X-Files: Conspiracy is a crossover event published by IDW Publishing, released in January 2014. It involves characters from The X-Files interacting with four licensed properties that IDW publishes comics for (Ghostbusters, Teenage Mutant Ninja Turtles, Transformers, and The Crow).

The event of the year begins here! When The Lone Gunmen discover Internet files from the future, they learn that a plague will soon wipe out most of humanity. With Agents Mulder and Scully working one lead, the Gunmen must spring into action and investigate several urban legends: a group of ghost-hunters, mutant turtles that live in the sewers, shape-changing alien robots, and a vengeful spirit from beyond the grave!

Issues confirmed to include TMNT

Retrieved from "https://turtlepedia.fandom.com/wiki/The_X-Files:_Conspiracy?oldid=522554"
Community content is available under CC-BY-SA unless otherwise noted.