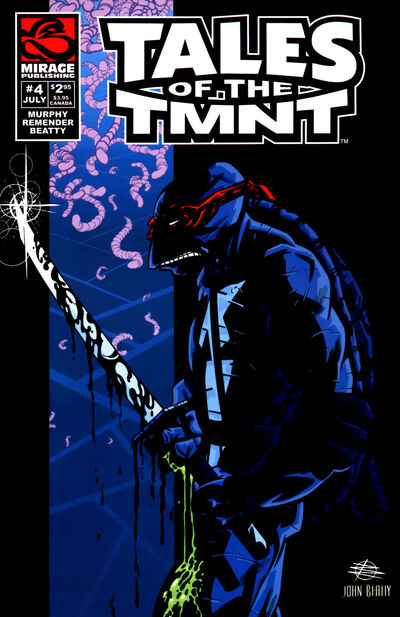 The Worms of Madness, Part 2 is issue #4 of Tales of the TMNT volume 2, published on July 2004 by Mirage Studios. It contains a backup story, The Grape.

The turtles recover from Shredder's assault, but something is clearly amiss; Michelangelo is the only one concerned about finding and saving Splinter, and the others are lazy, unmotivated, and dredging up phony excuses. Realizing that some sort of spell is at hand, Michelangelo searches through Splinter's mystic texts, lamenting their father's not teaching them at least the basics as a contingency plan, no matter what the danger. Finally, he finds that the answer is within another dimension.

The four Turtles are brought before Pai-Doth Noor, a massive, four-armed baboon. He recognizes Leonardo, and a flicker of memory of the bizarre being seems to alight within Leo. Michelangelo has Pai-Doth Noor use his talents to reverse the Turtles' personalities back to normal (done with "rank monkey breath") and send them to their father. The Turtles are transported to New Jersey.

In Jersey, they find Shredder and the Foot Mystic atop a roof. They plan to transfer Shredder's consciousness into Splinter. As the Mystic prepares, the Turtles ambush them, hacking Splinter free from Shredder's grasp. Shredder wobbles in pain, as he feels himself dying again. Crashing into the ocean, Shredder laments that he is no longer Saki, worm, shark, or any of the beings that make up his existence, but instead an abomination of nature. Using his octopus-like tentacles, he pulls the Mystic into his chest cavity and falls deep into the ocean. This is the last anyone ever sees of any incarnation of Oroku Saki in this world.

Down in the depths of the sea, however, the worms latch onto the form of the Mystic, transforming him into a shark monster.

Frontispiece.
Add a photo to this gallery
Retrieved from "https://turtlepedia.fandom.com/wiki/The_Worms_of_Madness,_part_2?oldid=552268"
Community content is available under CC-BY-SA unless otherwise noted.