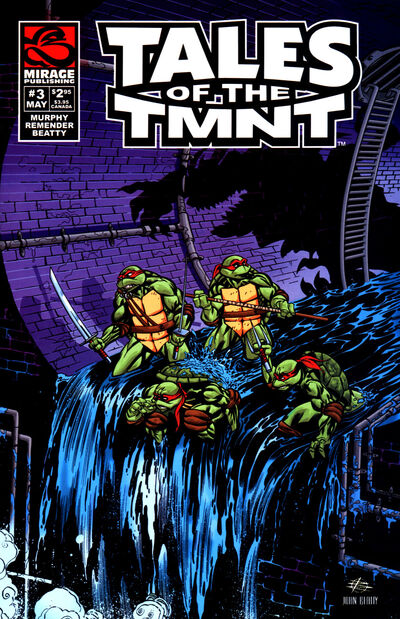 The Worms of Madness, Part 1 is issue #3 of Tales of the TMNT volume 2, published on May 2004 by Mirage Studios. It contains a backup story, Green. 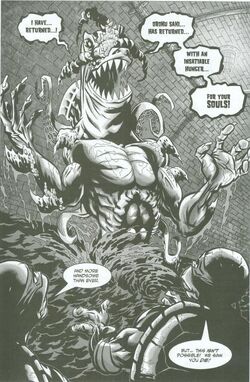 The issue opens with Pai-Doth Noor floating in black space, laughter surrounding him.

Following this is a flashback to the events of Return to New York, Book Three as Oroku Saki is killed, for the second time, by Leonardo. As this occurs and Saki's body is burned on a funeral pyre in the bay, a Foot Mystic narrates, telling how much he hates the turtles, and explains how he will bring the Shredder back to life. As Saki's pyre heads out to sea, the colony worms that made up Saki's reincarnation pour from his mouth, and into a shark.

As the Mystic goes about his work, the Turtles kick back after their long, hard battle, preparing to watch The Simpsons. Leo finds one of the worms on his katana, flicking it off and flushing it down the sink.

One week later, Splinter and the turtles are walking around in a general sewer area, with Michelangelo clowning around as usual. He taunt's Leo's morose mood, and strangely Splinter joins in, schooling Leo with a few swift strikes. Just as he announces that he has an important lesson for his sons, Mike spots a shark swimming in the sewer water. Unfortunately, it's not just a shark, but a reborn Oroku Saki, a manlike mutation created from a shark and the clone worms.

The turtles attack the Shredder, but he easily defeats them. Using a swarm of worms, he carries Splinter into his chest cavity, and leaves the beaten turtles floating in the sewer.

Add a photo to this gallery
Retrieved from "https://turtlepedia.fandom.com/wiki/The_Worms_of_Madness,_part_1?oldid=534763"
Community content is available under CC-BY-SA unless otherwise noted.