The Trial of Krang is a story arc in IDW Publishing's Teenage Mutant Ninja Turtles continuity. The story details the resolution of General Krang's war crimes against the Neutrinos and many other denizens of Dimension X. The weekly miniseries TMNT: Dimension X ties into this story arc, entirely taking place between issues 1 and 2 of The Trial of Krang.

The story begins at a high-security Neutrino facility, where Krang is ranting at his lawyer, Councilor Vin-Bini, about how his trial is "overkill" and that he is innocent. After the defense leaves, Krang passes a device to Hakk-R.

Meanwhile, the Turtles are preparing to head to Dimension X with the Fugitoid, and Raphael is saying farewell to Pepperoni. They are greeted by Commander Dask and taken through the portal, but are horrified to see Leatherhead on the other side. It turns out that he was brought there as a witness against Krang.

The Turtles are warmly welcomed back by the Neutrino royal family, especially Princess Trib. But not all is good news, as they reveal that the Malignoid Swam is approaching. Additionally, they have need of key witnesses to Krang's war atrocities, without which the case against him is too thin to succeed.

Suddenly Hakk-R injects the prosecutor, Councilor Apap, with a poison that instantly kills him. Leatherhead manages to drag out the assassin, only to have a substance squirted in his eyes, temporarily blinding him. The Turtles prepare to take him on, and Leatherhead grabs him once again, only for Hakk-R to teleport out of the room.

King Zenter is horrified, and afraid that the case may be lost because of Apap's death, since he had great knowledge about the evidence. But Leonardo declares that they have come too far to give up, and appoints Fugitoid the new prosecutor. The Turtles, meanwhile, head off to gather up the witnesses and bring them back for the trial.

“Trial of Krang,” part 2 of 3. The trial begins, and the surviving witnesses are strange and unusual, featuring old friends and uncertain allies. Krang has more tricks up his sleeve though, and the Malignoid swarm threatens to devour all of Dimension X!

The exciting lead-up to the epic, over-sized TMNT #75!

The Malignoid Swarm heads straight for the Neutrino planet. The main defense against them is the Triceratons, who have been promised a planet of their very own by King Zenter if they successfully save the Neutrinos.

Down on the planet, Michelangelo, Leonardo and Raphael all join the Neutrinos in fighting on ground level, using laser versions of their signature weapons.

Donatello, meanwhile, is sequestered with the witnesses and Fugitoid when Hakk-R blasts into the room and starts shooting the strongest witnesses there. Polly manages to temporarily turn back the assassin by flinging pollen in his eyes, Hakk-R recovers and prepares to kill Polly, but just then Michelangelo, Leonardo and Raphael crash through the ceiling with one of the Swarm, which Leatherhead kills.

With Hakk-R temporarily a prisoner of the witnesses, Donatello quickly hatches a plan. Polly can produce large amounts of pollen that cause pause and/or hallucinations, and the effect is greater with the larger amount of pollen produced. However, it will throw her into a dormant state until returned to her homeworld. He prods Stump into offering Hakk-R a deal.

The assassin sneaks onto the Malignoid queen's mothership and slips the pollen into the ventilation system. Experiencing intensely painful burning sensations, the parasitic aliens withdraw.

The following day, the trial gets back underway. Since Hakk-R murdered the judge, King Zenter takes charge of the case himself, and Leatherhead gives his impassioned testimony. The next witness is Krang himself, arguing that his actions were justified in the pursuit of his race's survival, and also needling Zenter about using the Triceratons to save the Neutrinos. Finally there is the Fugitoid, Zayton Honeycutt, who argues against Vin-Bini.

Finally Zenter gives his decree: because he does not feel he can morally pass judgement on Krang, he has handed judgement over to Ma'riell on Burnow Island. She has decreed that he will serve a lifetime sentence there, which will be morally just coming from his own people. Two Utroms, Lieutenant Kleve and Corporal Montuoro, appear through the portal to escort Krang back to Burnow Island.

Enraged, Leaderhead rises and lunges towards the Utrom trio, and eats Krang alive before anyone can stop him. He dives through the open portal and escapes. The Utrom pair seem oddly reluctant to have anyone else pursue him, and hastily head back through the portal. Once back on Earth, they reveal that they are in fact traitors to Ma'riell, and that they are now secretly planning to revive Ch'rell in Krang's stead.

The Turtles say farewell to their Neutrino friends, and Zak and Kala prepare to return the witnesses to their various homes.The Fugitoid says that he's going to stay on Neutrino and help his people combat the Swarm when it inevitably returns. The Turtles head through the portal at last, heading back home.

In the epilogue, a guilt-ridden Zenter speaks to the Triceraton commander, revealing that he has not allowed them the opportunity to return to their home. They don't need a homeworld, he says, because they already have one waiting for them: Earth. Furthermore, he believes that all Earthlings are as good as the Turtles are, and thus will welcome the Triceratons. He opens a portal to Earth and the Triceraton ships fly through.

Just then, Agent Bishop receives news that the Earth is about to be invaded by alien ships... 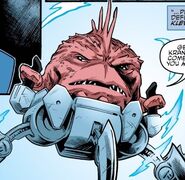 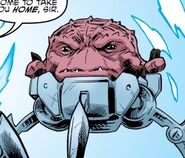 Add a photo to this gallery
Retrieved from "https://turtlepedia.fandom.com/wiki/The_Trial_of_Krang?oldid=369692"
Community content is available under CC-BY-SA unless otherwise noted.
FandomShop DC Trivia GalaxyQuest