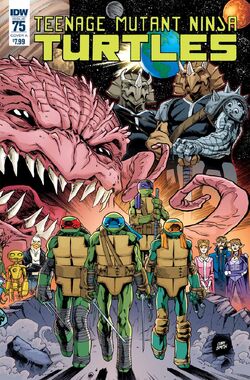 The oversized conclusion to the Turtles’ greatest extra-dimensional story arc is here! Both the prosecution and the defense have tricks up their sleeves as testimony gets emotional. Meanwhile, a war rages outside the courtroom as the Malignoid swarm engulfs Planet Neutrino!

by Kevin Eastman & Tomi Varga
Add a photo to this gallery
Retrieved from "https://turtlepedia.fandom.com/wiki/The_Trial_of_Krang,_part_3?oldid=532094"
Community content is available under CC-BY-SA unless otherwise noted.