The Time Traveler Returns is issue #22 of Eastman and Laird's Teenage Mutant Ninja Turtles volume 1, published on June 1989 by Mirage Studios. Although it is not the earliest issue of the main comic series to have since been declared "non-canon" by Peter Laird, it is considered the uncontroversial beginning of the wider Guest Era of comics made without the creative input of Mirage Studios staff.

This issue forms the second part of a trilogy, preceded by A Teenage Mutant Ninja Turtles Story and followed by Totally Hacked!.

As the issue begins, the turtles are ransacking their lair after receiving a bomb threat, shortly after their encounter with the Time Traveler girl from issue #16. The lads aren't having any luck locating the explosive, but Leonardo is confident that the threat is real... as his "Turty Sense" is tingling. As Leo appeals to his brothers to continue the search, Raphael grabs the TV remote out of boredom. As he clicks the button, Leo screams, "NO!" and then the TV launches a bomb out of its screen. Meanwhile, six years in the future, we see the young girl emerging from her time machine. She's pleased to have arrived safely home, after her problems back in issue #16. She's not so pleased to find a bizarro monster waiting for her (although it does offer her a cookie). The girl screams and flees her apartment, by crashing through a second story window. Fortunately, the monster completes an acrobatic catch and sets her safely to the ground, where the child bursts into another sprint. The creature then zaps the terrified child with a freezing ray and engages her in conversation.

We learn that the alien is an ambassador of an alien race called the Skwal. His name is an unpronounceable symbol, so he goes by the name of "George." We finally find out that the girl's name is Dale Evans McGillicutty. George explains that Dale is in big trouble—as is all of humanity. The Skwal have been watching the planet Earth, attempting to keep the human race from destroying themselves (unfortunately the aliens arrived too late, so things on Earth are already too messed up to fix). George has a particular interest in Dale, as she invented the time machine (although thanks to her manipulation of time, she actually didn't - ah temporal anomalies). George needs Dale to use her time machine to go back 2 million years into the past and attempt to change the mindset of humanity, to make the species less violent and thereby giving hope to the future of the race and planet. However, the window of opportunity is closing rapidly, as the Skwal scientists only think that there's one day left in the time machine's life before it pops out of existence for good. The girl reluctantly agrees to go on the mission, but insists on taking some cargo with her. As Dale activates the machine, things go all higglety pigglety.

Cut back to the present. Master Splinter is there with the four turtles... who are now four odd looking robots. Splinter explains that the bomb went off and blew the Turtles to bits, but he's managed to save their parts as well as their brains, which he's had to place into the robots for safe keeping. As Master Splinter gets busy piecing the Turtles' bodies back together, the TMNRobots head off to Bill's TV Repair to pay April's electric bill. We discover that Bill is demented and very angry at April for refusing to go out with him - so angry that he planted the bomb in her television that blasted our hapless heroes to smithereens. After Bill rants about April, he finally notices the four whacked 'bots in his building and assumes that they're devils. The crazed repairman then activates his giant TV Robot, which attacks the Turtlebots. As the battle ensues, Raph manages to wrest the TV Robot's remote control from Bill, and commands it to sit... unfortunately, the mechanical monster is standing directly above Bill and Raphbot when it receives the command...

Two million years in the past, Dale emerges from her time machine, and is quickly attacked by an apeman. Fortunately the girl has George's ray gun, and she freezes her ancestor in mid-leap. Dale explains to monkeyboy that she's here to make his life easier, so he won't be so violent and humanity will evolve into a more peaceful race. She teaches him about gardening and presents him with a comfy recliner. The Time Traveler also gives the apeman a mask of Jocko (an Australian actor who used to sell batteries in American TV commercials... very odd TV commercials), to protect him from predators. Finally, Dale gives monkeyboy a puppy, for him to snuggle and care for. Mission accomplished, Dale gets back into her time machine and heads for home.

When Dale emerges from the machine, George is ecstatic. Evil men across the globe are turning over a new leaf and becoming more admirable. The world is currently a confused mess, but by morning everyone should have morphed into far nicer creatures, thus making Earth a veritable paradise of peace and love. "No more armies... no more wars... no more weapons..." muses the Skwal...

"In short, nothing to defend yourselves from the Invasoskwals! This great paradise will be ours!" the crafty alien finishes.

"You tricked me!!" exclaims Dale.

Things go haywire once again, and then we cut back to April's apartment, where we find the Turtles returned to their old selves. As they celebrate with Casey Jones and Master Splinter, Mike's soda can pops out of existence. As he asks if anyone saw it happen, April calls out to them to come quick. As the guys rush to find out what's wrong, we see that April is watching the Pee Wee Herman show, and the secret word of the day is "turtle." As Splinter laments the mess the Turtles have made of the place, everyone starts losing their memory... and then the TMNT and Master Splinter revert into their original, non-mutated animal forms. Casey looks up from a crossword puzzle and asks April if she said something... in the final panel we see Ms. O'Neil delighted to find four normal turtles on her sofa. 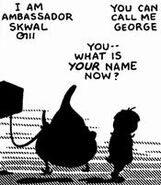 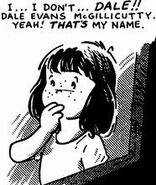 Add a photo to this gallery
Retrieved from "https://turtlepedia.fandom.com/wiki/The_Time_Traveler_Returns?oldid=504284"
Community content is available under CC-BY-SA unless otherwise noted.