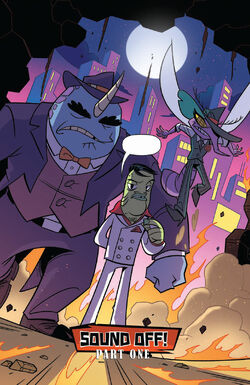 The Silent G's [sic] are a gang of three mutants who serve as the primary antagonists of Rise of the Teenage Mutant Ninja Turtles: Sound Off! They have a gangster-esque aesthetic and were co-workers of April O'Neil at Aquatic MuSEAum before their mutation.

The Silent G's are introduced breaking into Lactose Tolerant Inc, an ice cream vendor, where they steal a couple of ice cream trucks using Gned's ability to nullify sound to get away with it right under the security guard's nose.

Donatello had been tracking their activities for some time, and found that their previous robberies (construction site equipment and stereos from an electronic store) were in the vicinity of Lactose Tolerant. From there, he was able to calculate that The Silent G's would hit either the Budget Animal Shelter, or a venue which sells expired lunch-meat. The Ninja Turtles staked out the former, which turned out to be the correct choice. They were unfortunately no match for The Silent G's, who defeated them rather easily.

Retrieved from "https://turtlepedia.fandom.com/wiki/The_Silent_G%27s?oldid=517862"
Community content is available under CC-BY-SA unless otherwise noted.