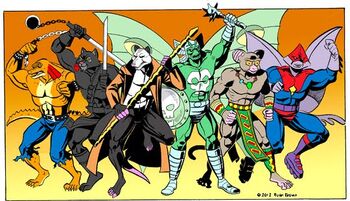 The Selected was a comic book being developed by Ryan Brown and Fernando Leon Gonzalez. Despite the product in this incarnation being wholly unattached to the TMNT franchise, the characters and concept holds deep roots with TMNT history.

According to Brown, the characters were initially rejected designs for the TMNT toyline [1] The characters were later resurrected for the second season of The Mighty Mutanimals animated series - a project which never left the concept stage.

In the late 2000s, the characters were later planned on being introduced as the team for a revitalized Mutanimals project. Reports conflict on whether they were to be a successor to the TMNT Adventures team, a "Mirage Mutanimals" team, or an unrelated team with the same name. With Viacom's buyout of the TMNT in 2009, however, Brown and Gonzalez became unable to use the Mutanimals name; the team and the book were being shopped around under the name "The Selected", but as of 2016 has yet to materialize.

Retrieved from "https://turtlepedia.fandom.com/wiki/The_Selected?oldid=254647"
Community content is available under CC-BY-SA unless otherwise noted.