The Puma Blues is a comic book series written by Stephen Murphy and illustrated by Michael Zulli. It was the first breakout publication success for both creators before their future involvements with Teenage Mutant Ninja Turtles. It was published in its original run from 1986 to 1989, initially by Aardvark One International, but changed publishers mid-series to Mirage Studios for the rest of its run. The story originally was not given a proper ending, but a collected reprint in 2015 by Dover Publications included a new chapter completing the story.

The Puma Blues takes place near the turn of the 21st century, which at the time of the series' writing was still set in the future. The protagonist, Gavia Immer, is a United States government game warden who watches video cassettes left by his father after his death.

The series incorporates many narrative themes which Murphy would become famous for as later writer for Teenage Mutant Ninja Turtles Adventures and Tales of the TMNT, including existential questions, environmental responsibility and social justice, along with the flying stingrays which would inspire the design of the first version of Man Ray for TMNT Adventures. The Puma Blues is generally for an adult audience, with strong language, violence, nudity and explicit sexual situations.

One short story in the Mirage continuity, Choices, was written by Peter Laird and illustrated by Kevin Eastman, and first published as a backup comic in The Puma Blues issue #20 in 1988. The story features a future wilderness-dwelling version of Raphael who would also appear in later Mirage stories Dark Shadows and Day in the Life. 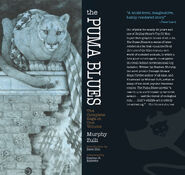 Add a photo to this gallery
Retrieved from "https://turtlepedia.fandom.com/wiki/The_Puma_Blues?oldid=421038"
Community content is available under CC-BY-SA unless otherwise noted.