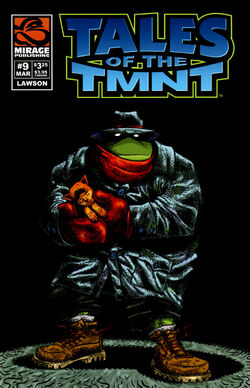 The Path is issue #9 of Tales of the TMNT volume 2, published on March 2005 by Mirage Studios. It contains a backup story, Community Service.

In the intro, Master Splinter (holding nunchuks in one hand and a lily in the other) speaks to an unseen figure (hinted to be Michael-Angelo) about the harsh choices a warrior must make, as well as compassion. The scene then cuts to Splinter foreseeing an omen of death during meditation, before changing again to the turtle's apartment.

While the turtles are busy (Raphael, Leonardo and Mikey with the TV, Donatello with the computer), Klunk climbs up the window & escapes via a hole in the screen, which Donny berates Mikey for not fixing, noting Klunk might get hurt or contaminated by stray cats. While Klunk's exploring the nearby alley, he is spotted by Lily, a vagrant old lady with a cart & three cats. Mistaking him for a stray in need of care, Lily tries grabbing Klunk, only for him to hiss at her and sprint towards the street. A driver talking on his cellphone spotted the cat running in front of his car & swerved at the last minute into a street lamp, injuring Klunk and knocking him off the street.

The turtles hear the crash and the driver yelling about a "stupid cat" in front of his car, causing Mikey to fear the worst for his pet. Lily rushes to the bleeding cat, places him on her caddie & hurries down the alley, saying she can "fix the kitty" by going to the river. Believing a "crazy lady" took Klunk, Mikey quickly gets dressed in concealing attire and pursues Lily through the rooftops. He eventually reaches her and blocks her way, demanding his cat back. Lily explains she's trying to help, only for the turtle to shove her away & take back Klunk, lamenting how he could let this happen. The old woman claims to know a man called Tomas who can save his cat, saying a veterinary would be of no use in this situation. Mikey begrudgingly agrees to follow her to Tomas' house near the river.

Tomas greets Lily, who asks him to heal the wounded cat Mikey cradled in his arms. After convincing the turtle to let him hold and examine Klunk, the old man concludes the cat doesn’t have long to live. When Mikey pleads for a way to save his pet, Tomas states it's possible to save Klunk via a ritual sacrifice of “an equal, comparable life”, aka another cat. In a moment of desperation to which he promptly apologized, Mikey asks a horrified Lily to sacrifice one of her own cats. The turtle gets an idea and says he'll be right back, before rushing somewhere as fast as he could.

But on his way, he stops dead in his tracks, second guessing his actions before yelling out at this tragic turn of events, unable to decide what to do next. Seeing a sewer rat, Mikey recalls a talk he recently had with Master Splinter. The latter said he foresaw dark events about to unfold in his life, and believed a certain weakness in his son might spell his doom. He asks the turtle to be more hardened like his brothers, to put his emotions aside and do what needs to be done without hesitation. On the other hand, he tells his son there's invaluable purity within him, and asks him to safeguard it despite his path as a warrior.

The scene cuts back to the river, where Tomas is still holding the dying Klunk. Mikey gets back with a a cat in his arms. He tells Tomas it's a stray living in his alley, & tries to justify sacrificing it by saying “nobody loves it.” However, the young turtle recoils in shame at his own words. Admitting he cannot go through with it, he tells the old man to let the stray go and cancel the ritual. Mikey tearfully apologizes to Klunk, holding him to his chest in his final moments and bidding his friend farewell. As the turtle left, Tomas remarks the stray’s life was not comparable to Klunk’s.

Back home, Mikey requests a talk with his master. In shame and sadness, he admits failing to walk the path of a warrior as he was told to, and that his inability to unflinchingly make a hard choice cost him a friend. However, much to his surprise, Splinter compares his son to a riverbank lily, the most beautiful, yet delicate of all flowers. He even admits he could learn something from Michael-Angelo, who walks two different paths. The other turtles arrive and ask their brother to follow them to the alley. There, he sees the stray cat he spared gave birth to a litter of kittens, revealed to be Klunk’s via a DNA test Donatello performed. Mikey teases Donny over the kittens' obvious resemblance to their father, and adopts one in memory of Klunk.

Frontispiece.
Add a photo to this gallery
Retrieved from "https://turtlepedia.fandom.com/wiki/The_Path?oldid=536142"
Community content is available under CC-BY-SA unless otherwise noted.