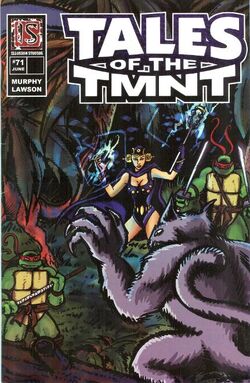 The Paradox of Chudnovsky is a story with a long history. It has been published in two official non-English language compilations (Spanish and Russian), and in English in an unofficial printing (oddly, by the man who would later become the comic's official distributor in Russia).

The reason for creating this story was due to the assumption on Peter Laird's part that he would not have permission to use Dave Sim's Cerebus in a reprint of Teenage Mutant Ninja Turtles #8. Sim gave his blessing provided proper credit and payment was made, but Mirage Studios went forward and wrote the replacement for TMNT #8.

The story was printed in a collected book in Spanish (Las Tortugas Ninja: TMNT 2, by Norma Editorial), but an agreement between Laird and Sim was made before any English edition of the story could be printed.

In 2011, Arseniy Dubakov printed a limited run of the story in English and Russian under his Illusion Studios banner, as Tales of the Teenage Mutant Ninja Turtles #71. The story was officially printed again by Dubakov and Illusion Studios after becoming the official distributors of the Russian market editions of TMNT comics, in a collected volume. This version features a new frontispiece by Jim Lawson, as well as a previously missing epilogue never been published in the previous two editions of the story.

Retrieved from "https://turtlepedia.fandom.com/wiki/The_Paradox_of_Chudnovsky?oldid=509609"
Community content is available under CC-BY-SA unless otherwise noted.