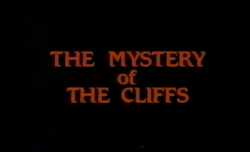 The Mystery of the Cliffs was a 1992 VHS video commissioned by the United States Bureau of Land Management. It was intended to introduce children to the concept and importance of caretaking of the country's natural resources and heritage sites.

Appearing in The Mystery of the Cliffs

The Ninja Turtles head out to the Arizona desert on the insistence of Master Splinter, hoping it would teach them to be better ninja and Americans. Raphael gets bored and wanders off while his brothers make camp.

After the camp has been set up, the Turtles wonder where Raphael has gone. Donatello spots a dwelling on a faraway cliff, and surmises that's where his brother must have gone.

Inside the dwelling, they spot some carvings on the wall, which Leonardo and Michelangelo mistake for graffiti. Donatello stops Michelangelo from carving his name in the wall (with his nunchaku?) and explains that they are artworks created by the original residents of the dwelling. He also tells the other two about the general idea of this place being potentially one of thousands across the country that has not only been undiscovered by modern citizens, but also that there is no assigned custodian to the sites, and that they - and all of us - must take care of these places ourselves.

Suddenly, the Turtles hear a noise and peer through an opening. There, they see a couple of Foot Ninja who just happen to be looting the place of its valuables, and that they've tied up Raphael. As the Turtles argue loudly about their next steps, one of the ninja approaches and beans Leo with a shovel. The three of them suddenly wake up, also tied up. A third Foot Ninja is now accompanying the other two, and they discuss replacing the loot they dug up with the Turtles' corpses to fool any archeologists in the future into thinking the cliff dwelling was inhabited by an ancient race of giant turtle-men.

Before the Foot can take action, however, they are stopped by an apparent astral projection of Splinter. They threaten to bury him along with the Turtles, but find that they can't touch him. "Splinter" waves a hand and a star appears, moving over the Turtles and waking up Leonardo, allowing them to free themselves. After a jump cut, the Turtles have beaten the Foot and tied them up.

Back at their camp, now at night, the Turtles sing a version of "Home on the Range" identifying the Shredder as a "bogus Foot nerd". The Turtles then discuss becoming honorary custodians of sites such as the cliff dwelling to keep such incidents in the future from occurring, when they suddenly hear a noise. They fear The Shredder is approaching, but it turns out that Splinter has arrived, tripping over the Turtles' improperly stored gear, and recommends back flips as the "cure" for this conduct. He then says he will overlook the error since the desert air makes him feel generous, but then an excited Michelangelo smacks his master in the head with a box of pizza, knocking him back down.

After he is helped back up and the turtles dig into the pizza, he tells them that he had them come there specifically to teach them about the stewardship of such heritage sites. Leonardo tells him the entire story of the video up to this point (despite Splinter apparently being there in literal spirit to free them). Raph then asks why they have come to this exact spot, and Splinter tells him one of his ancestors settled there exactly 400 years prior, and he visits occasionally to commune with him. Mikey asks Splinter why he took off right after helping them, and Splinter tells them that it couldn't have been him, since he only just arrived when he tripped over their camping gear. This blows the Turtles' - and presumably, the viewers' - minds.

After the credits, a voiceover from Donatello addresses the audience over stock clips of historic sites, emphasizing the importance of helping to preserve these historic sites. At one point, he's interrupted by a clip of him from the main portion of the film explaining the petroglyphs to Leonardo and Michelangelo. The film ends with the clip of the Turtles singing again.

Retrieved from "https://turtlepedia.fandom.com/wiki/The_Mystery_of_the_Cliffs?oldid=496678"
Community content is available under CC-BY-SA unless otherwise noted.