The Meeting of the Mutanimals is a two-part story arc printed in Teenage Mutant Ninja Turtles: Amazing Adventures issues #3 and #4. It takes place during the Kraang Hive Mind's occupation of New York City, and chronicles how the Mighty Mutanimals became a team. 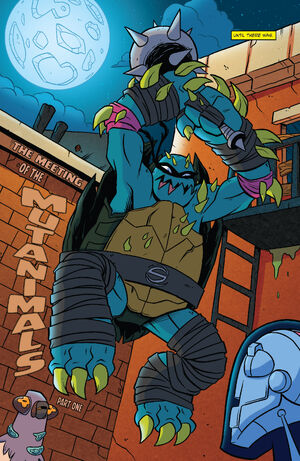 The story begins by establishing the time and setting of Manhattan during the Kraang occupation. The Kraang had free reign over the island, and had captured or mutated most of the inhabitants. Even the turtles had since fled the city. Those who were left survived in hiding, but they had no hope left.

Pigeon Pete, who has managed to evade capture so far, accidentally knocks over a garbage can, and the noise attracts Kraangdroids to his hiding place. Pete is corned and cannot escape, but Slash arrives, ambushing the Kraangdroids and saving Pete. In the chaos, Slash slams a Kraangdroid against a bakery truck, causing its back doors to fall open and loaves of bread to fall out. Pete spots the bread and single-mindedly dashes toward it as Slash keeps fighting. But even as Pete continues to munch on his bread, he also proves himself to be formidable enough to take down two Kraangdroids all by himself. Slash looks impressed at this spectacle.

Slash has a flashback of the days when he was still Raphael's pet turtle Spike, living in the lair of Splinter and his sons. Spike is chewing on his leaf as Raph trains alone in the dōjō. Spike witnesses as Splinter asks Raph why his brothers aren't practicing with him. Raph complains that his brothers are busy goofing off and not taking their training seriously. Initially Splinter is skeptical, until he glances out one of the arches and sees Michelangelo ballroom dancing with the training dummy as Leonardo and Donatello watch and laugh. As bizarre as the spectacle looks to Splinter, he explains to Raph that team bonding is an important part of ninjutsu, no matter what kind of activity it is. Splinter adds that success depends on depending on others.

Back in Kraang-occupied New York City, Slash and Pete are on a rooftop looking down on a school now infested with Kraang. Slash explains that he met someone named Kurtzman who said this school is being used to hold dangerous prisoners. Pete thinks he understands, concluding that they must stay away from this school, but Slash proposes the exact opposite.

Wandering down school halls filled with lockers, Slash and Pete find the door to the school's gymnasium. Looking through the door's windows, they see a few holding cells, which are being guarded by Kraangdroids and Biotroids. Kraang Subprime himself is also in the gym. Pete expects that Slash's plan is to use ninja stealth to take down the targets in the gym. Slash responds by asking Pete pull a red lever just next to the door. No sooner does Pete pull the lever that Slash crashes through the gym doors, immediately taking out two Kraangdroids even as the school's fire alarm has just gone off. Pete is briefly stunned by what he has just seen happen before joining in the fight. But Slash is caught off-guard when one of the Biotroids opens its butt cannons and shoots at him, knocking him down. Subprime orders that Slash be locked up. Pete cries out for Slash, but is himself also soon detained.

As Slash is being locked up, he sees the faces of Leatherhead and Dr. Tyler Rockwell looking through the bars of two of the cells already occupied. 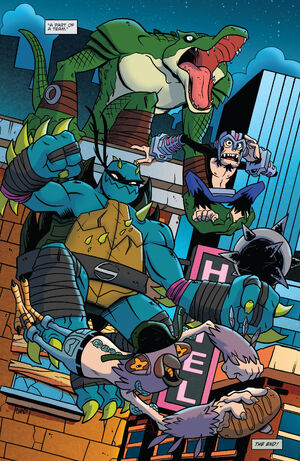 The chapter starts with an unidentified narrator telling about how four ninja turtles fled New York City, but one—Slash—stayed behind. After recapping the previous chapter up to Slash's capture by the Kraang in the school gymnasium, the narrator judges how weird it is that Slash is smiling at this moment.

Slash has another flashback from when he was Spike, observing Splinter and the four turtle brothers train in the dōjō. While sparring, Leonardo defeats Michelangelo and Donatello. Raphael tries to attack Leonardo from behind, but Leo predicts the attack and sends Raph crashing against the dōjō wall. Splinter cautions Raphael that efficient attacks can fail if they're predictable, and it's important to know how to misdirect. Raph resumes the fight, throwing his sai in Leo's direction, but Leo dodges and the sai rips through the Japanese folding screen and continues into the common area. Raph tells Leo that he was actually aiming for the Space Heroes pinball machine Leo loves so much. Leo looks through the ripped paper, finding that the sai hasn't hit the pinball machine at all. But Raph has taken advantage of this distraction to land an unexpected uppercut punch to Leo's chin.

Slash regains consciousness locked in one of the holding cells. The water bowl in his cage suddenly starts levitating apparently all by itself, and is promptly splashed into Slash's face. A voice comes from the adjacent cage—it is Dr. Tyler Rockwell, also a prisoner of the Kraang, who was trying to make sure his new neighbor was still alive. Slash and Rockwell already recognize each other, and Slash also correctly guesses that Leatherhead is in the third cage. Slash asks what happened with the water bowl, and Rockwell explains that the Kraang had experimented on him, increasing his psychic abilities tenfold, but that he's currently involuntarily fitted with a dampener that weakens his abilities, and can't do much more than levitating a water bowl. Rockwell further explains that there doesn't seem to be a way to escape from inside their holding cells. Pete is not in a cell (there are only three), but his arms are chained to a wall outside. Slash knows there is a control panel nearby, but Rockwell says it's proven too complex for him to use telekinetically. Slash guesses that the panel may still be fragile, but he is interrupted from outside the cell by Kraang Subprime looking in. Since Slash had already escaped from the Kraang once before, Subprime insists that won't happen again. Slash asks Subprime what the Kraang Hive Mind are doing, and Subprime explains that they're going to terraform the Earth into another Dimension X. Slash laughs, and opines that, by destroying what makes the Earth unique, the Kraang are destroying things they could have otherwise enjoyed, such as pizza. Easily baited, Subprime orders his minions to go out and find some pizza for him to sample.

Thirty minutes or less later, Slash grins impishly as Subprime complains that his pizza isn't even warm. The minions explained that they found an abandoned pizzeria and grabbed pizza that had been left sitting inside a cold pizza oven. But they explain this using the same grammar tics common to the Hive Mind, which greatly irritates the ordinarily clear-speaking Subprime. Slash tells Subprime not to waste the pizza, but Subprime insists that his mutant prisoners won't get any of it. Slash says it's a shame to waste pizza, and goes on to graphically describe the pizza's doughy, bread-like (and possibly stale) crust. Hearing this whips Pete into a bread-craving frenzy. Slash wastes no time asking Rockwell to telekinetically move the pizza boxes to the control panel. Pete finally breaks from his wall chains, and Rockwell throws the slices of pizza against the controls just in time for Pete to descend onto the panel, damaging it with his foot claws in the chaos. The malfunction of the panel immediately throws the holding cell doors open, and Slash tells his fellow mutant animals—whom he suddenly decides to call "Mutanimals"—to immediately attack. Rockwell wastes no time removing his dampening helmet, and the four Mutanimals make their escape, the school exploding behind them. Pete laments how he never actually got to taste the pizza.

Back in the present, Slash, Leatherhead, Pete and Rockwell cross rooftops as a new team—the Mighty Mutanimals.

Retrieved from "https://turtlepedia.fandom.com/wiki/The_Meeting_of_the_Mutanimals?oldid=491926"
Community content is available under CC-BY-SA unless otherwise noted.