The Rockefeller variation is of the Kraang in its robot body which, in turn, is in a human disguise. It has black, slicked over hair and a double sided head. The face printing features half of his face robotic with the other half light nougat with eyebrows, cheekbones and a mouth. The back has some robotic printing. The front of his torso features a ripped light blue suit with the pink Kraang peeking out from one of the rips. The back printing features a large, substantial rip with the back of the Kraang alien visible. His leg piece is baby blue and has his left leg of his pants, torn with metal parts showing.

The minifigure is on a 2x2 lime green tile, that is embedded in a card backing. The card is steel coloured and is shaped like a sewer manhole. It has the LEGO Teenage Mutant Ninja Turtles logo, and eight holes, leaking out bright green light. The back of the card shows Leonardo coming out of the sewers. It also announces the TMNT theme and invites the bearer to come to a NYCC launch celebration. 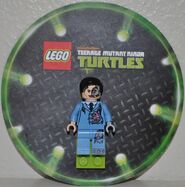 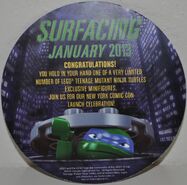 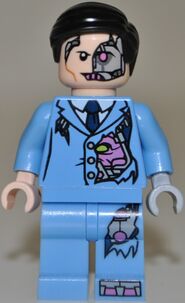 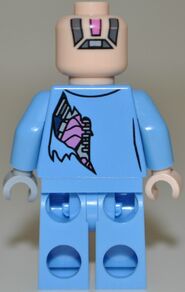 Retrieved from "https://turtlepedia.fandom.com/wiki/The_Kraang_Rockefeller_Center_LEGO_Store?oldid=123509"
Community content is available under CC-BY-SA unless otherwise noted.