"The Invasion, Part 2" is the twenty-sixth episode of the second season of the 2012 TV series, the fifty-second episode overall in the series, and is also part 2 of 2 of the Season 2 finale. It aired on September 26th, 2014.

As the chaos of the invasion grows, Donatello, April and Michelangelo must search for the others and make an attempt stop the invasion once and for all.

The invasion is underway, as robots, Kraang droids, and Mutagenic crystals cover the city. Donnie, Mikey, and April watch the news from her apartment. April starts scolding herself for bringing Irma to the Lair. She promises to set things right, wanting to find Leo, Raph, and Casey, but Kirby begs her to stay with him in safety. Raph sends Mikey a text that he and Casey are on their way, but are being chased by Kraang Prime.

Kraang Prime continues to spread Mutagen throughout the city. Raph and Casey are nearly captured by Kraang Prime, but the Earth protection force comes forward and they begin to attack in retaliation, giving Raph and Casey a chance to escape.

Leo continues to battle the Shredder's Foot-Bots, evading their arrows. He demands Shredder face him, but Shredder denies this, stating that Leo is beneath him. Leo begins to tire from the attacks, but the Foot does not let up. Tiger Claw asks the Shredder if he can finish off Leo and the Shredder tells him not to do it yet, as he wants to see Leo suffer.

Splinter continues to avoid the Kraang in the sewers. He discovers one of Leonardo's knives in the head of one of the robots but is then attacked by more Kraang. Splinter is soon cornered, but Leatherhead appears and joins the fight, pummeling the robot bodies. Splinter shouts for him to stop and Leatherhead regains his focus. Splinter expresses his thanks and asks Leatherhead to help him find the Turtles.

Leo fights off more Foot-Bots at the construction site. When his enemies seem to be defeated, Leo pauses, but a Foot-Bot on the ground grabs his leg and Leo loses balance, causing him to roll down the embankment and into the ice water collected in the pit below him. Leo soon comes out of the water, chilled and exhausted, but unwilling to face away from his enemies. The Shredder then gives Tiger Claw, Fishface, and Rahzar the go-ahead to attack Leonardo, and they do so. Leo fights them off and, amazingly, he defeats all of them, but the Shredder then strikes him in the back of the head, causing Leo to become completely unconscious. Tiger Claw picks up the senseless and battered Leo and looks at his T-Phone, seeing the text messages from Mikey telling Leo to come to April's home. The Shredder demands his minions to draw everyone in the apartment out by throwing in Leo. As Tiger Claw and the others leave to do this, the Shredder is confronted by Splinter, who demands to know where Leo is. The Shredder states that he has 'taken' Leonardo much like he took Miwa from Splinter. Splinter surges forward...and the two old enemies fight.

Meanwhile, in April's apartment, she and Donnie wake up Kirby, who thinks that the Kraang invasion was a dream, but Mikey tells him that it's actually happening. Raph and Casey then enter, saying that Kraang Prime is coming. Mikey throws his arms around Raph and Raph says that he is glad to see his little brother. April embraces Casey and says that she was worried she'd lost him forever. Donnie says to everyone that Leo is still out in the city, but Donnie stops talking when Leo is thrown through the window. Leo is unconscious and still breathing, but Mikey points out that his shell is cracked. Tiger Claw then tells the Turtles to come out and face them. Foot-Bots storm the apartment, but Donnie and Casey take them down. Rahzar meets them at the open door, but Mikey, in retaliation for Leo, throws a couch on top of him. Kirby leads them all to his old VW party wagon from his early days as a hipster, just as Mutagen is poured all over him, and, once again, Kirby is mutated. The others escape and drive away from Kraang Prime, ducking into alleys.

Meanwhile, the party wagon drives up to a garage. Leo cannot be moved, but Casey will protect him while he searches for his father and little sister. Raph, Donnie, April, and Mikey return to the Lair to find Splinter. April cannot sense Splinter anywhere. Donnie takes charge, telling Mikey and Raph to gather whatever sentimental item they want to keep with them. They will find Splinter and then they will leave town. Raph grabs his photo of Spike, Donnie bids goodbye to Timothy, stating that they will return if they can and if not, in 70 years or so, he should thaw and hopefully find a better world. Mikey collects ice cream kitty from the freezer. As April looks around the Lair, reliving memories of her time there, her head is filled with visions of Splinter and Shredder battling. She follows it to the end of a drain pipe where they are trapped behind bars and only able to watch and shout words of encouragement to Splinter as he battles Shredder. Although Splinter is able to send his enemy through a wall, Shredder strikes him down and throws him into a septic tank. This enrages Raph beyond words and only Mikey can calm him, as he throws his arms around his brother and assures him that Splinter is a master ninja and will be fine. Raph buries his head in Mikey's shoulder. April sniffles and tells Donnie that they cannot leave.

They take the Turtle Mech out and battle the Kraang and seem to hold their own, stomping on them, spewing fire and dropping heavy dumpsters on them. They attempt to attack Shredder's lair, but Kraang Prime fights against the Turtle Mech. April and Raph panic, but Mikey still has hope as Donnie launches a barrel of waste at Kraang Prime's face. Kraang Prime tells them that they have no right to stop their invasion. The Kraang were the ones who found the earth, who mutated monkeys into humans and now, the Earth will be mutated with the same indifference. The Turtle Mech continues to fight against the strength of Kraang Prime's robotic suit, but the sheer force of the battle is damaging the suit's weapons. Donnie tries the electric harpoon, even though it may fry the mech. Launching one end to the city's power grid, the other end lands on Kraang Prime's face and electrocutes it. This causes all of Manhattan to blackout, but the robotic body Kraang Prime uses falls. The victory is short-lived as Kraang Prime climbs out and attacks the mech, which is now useless. April uses the power of her mind to attack Kraang Prime as Casey drives the car in it. Everyone climbs in and drives off.

Donnie covers Leo and apologizes for not listening when he was told that they should leave the city. April says that they can all go upstate to North Hampton to her family farmhouse, which is empty and isolated. Casey agrees. April asks if he found his family, but Casey says that he couldn't find them, meaning that they could be gone for good. April then comforts him by laying on his shoulder. Mikey asks Raph what will happen next, but Raph, for the first time in his life, doesn't know. Mikey says that he misses Splinter.

Meanwhile, Splinter is washed down a sewer tunnel into a junction where the mutant Karai grabs him and lifts him out of the water. As she touches him, Splinter gives a gasping breath, and Karai jumps back into the water and disappears. 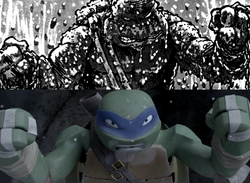